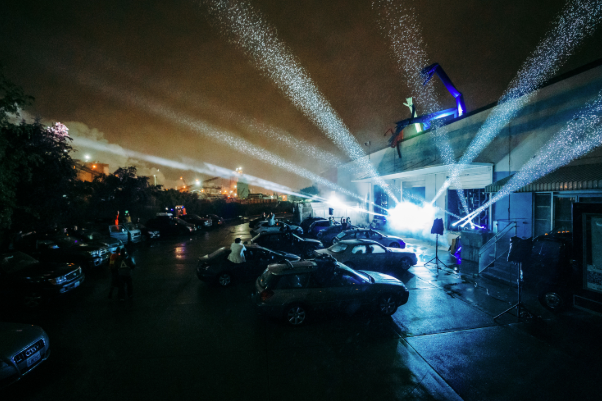 Covert Bat is no longer allowed to offer safe, socially distant shows due to the the Governor officially banning drive-in concerts. The fact that this safe format is still allowed for drive in movies, which offer restrooms and sell concessions, but not for other forms of entertainment is very hypocritical. Please send a message to the Governor and request that drive in shows be allowed for more than just movies and religious services!

On Thursday July 17th. Governor Jay Inslee made a decree that banned “drive-in concerts”. We are upset and shocked with this decision and we think you should be too.

Most upsetting is that the drive-in concert was singled out. Drive-n movies and drive-in religious services are still allowed. He is only singling out Drive-in concerts. As well as banning “Live entertainment of all types both indoor and outdoor”.

We fail to understand how a drive-in concert or DJ performance that is done following guidelines specifically provided by Gov Inslee’s office itself is suddenly to be banned. This effects all of our efforts as well as the efforts of several other drive-in concert series that were to start in the next few weeks.

It is important to note that no other state in the entire country has a ban on drive-in concerts. Drive-in events are considered a safe alternative option to actual concerts across the country and globally.

Please write gov Inslee and respectfully express your concerns with this proclamation. It makes no sense. -Covert Bat We were inspired by the efforts in Germany and Denmark to keep the live event industry alive during these times. -Covert Bat Our project “Covert Bat” was founded by the very people who have been directly impacted by the cancellation of the entire live event industry. Together we have created a model that shows our city, state, and country that events can be safely executed in these critical times. Our future is bright as we continue to work with our local government and event producers to continue producing live events for the community. -Bending Lite First off this is not an EVENT or a SHOW. For lack of better definition this is a drive thru spiritual experience. It is of course non-denominational and you may choose to believe in whatever higher power or lack thereof that you choose, but we know that if you are here you also believe in music. -Covert Bat Held at a private loading dock in South Seattle near the Duwamish, the whole process took a little under two hours from start to finish (including time spent driving around in circles due due to getting lost). There was a bit of a wait to get in to the event, as invitations were checked and vehicles were spaced out. While the location was a bit tricky to find, once we arrived the way in was well lit with volunteers pointing out the way and safely parking the vehicles. It truly was a drive through, you entered from one side and exited through the other. Getting in was a bit tricky with parking, but getting out was a breeze. Once all of the cars were parked, the show began. We had a 50 minute set from local DJ Darrius, but heard that Pezzner and Subset also DJ’d. There were three iterations of the inaugural event, with the setup being tested out over the previous weekend.

The spectacle, the energy, the rain piercing the lights and the fog. It was fantastic. It made me forget briefly the state of the world. It was what i needed. -Jupiter Once the show began, I felt like an infusion of life was being injected back into my soul. As I heard the music come through the speakers, something inside of me awoke and I felt like my soul was being restored. No matter how many live streams you watch, there is nothing that is the same as hearing electronic music on a quality sound system. -Kristen For the first time since early March, this event gave me something to look forward to and from the first note of music to the last, my smile remained and my heart felt happy for the first time in a while. -Adam Keep live music live, alive and safe in the era of a global pandemic. Until given further directive, we intend to keep the joy, thrill, and beauty of live music production alive through these trying times and beyond. We intend to do this safely and to that end we are attempting to stay within the guidelines created by State, County, and City officials. Unfortunately for our industry, some of the guidelines are not clearly enough defined so we have made decisions on our own that we believe to be safe, sane, and best practices here and now. -Covert Bat

We are in no way attempting to thumb our nose at authority. Quite the opposite. We exist to help pave the way and show that we can be a shining beacon of hope for the live event industry going forward. Nothing about this is ideal. However, we hope that you will come with us on our journey into the unknown. -Covert Bat When’s the next show? How can I get an invitation?

Covert Bat is happy to announce that they have found a new home in Tukwila! We attended a show in the new location; the sound system has been upgraded and they added a LED panel. We will be adding upcoming shows to the EDM Events Calendar and updating this post as they are announced. You can also follow Covert Bat on Facebook or email [email protected] and ask to be added to the mailing list.

We wanted you all to know that we have been working on something bigger. We had originally planned to open this weekend but with current events we feel that it is our duty and responsibility to take a stand and pause to call attention to the issues of race inequity, injustice and police brutality. We are taking a pause to recognize and honor the efforts of Black Lives Matters and their fellow protesters. This weekend let’s take the time to repair and heal our friends, families and community. There will be time for music and dancing later, hopefully in celebration of a better world. -Covert Bat 6/2/2020

Donate: Did you attend? Donate via texting “BAT” to 202-858-1233 or donate online here. The organizers raised about ~900$ of their 1,200$ goal for Memorial Day weekend. Going forward, ticketing may be implemented to recover costs but for now Covert Bat is financially supported by donations and volunteers.

Photos by Christian Jackson and EmeraldCityEDM.