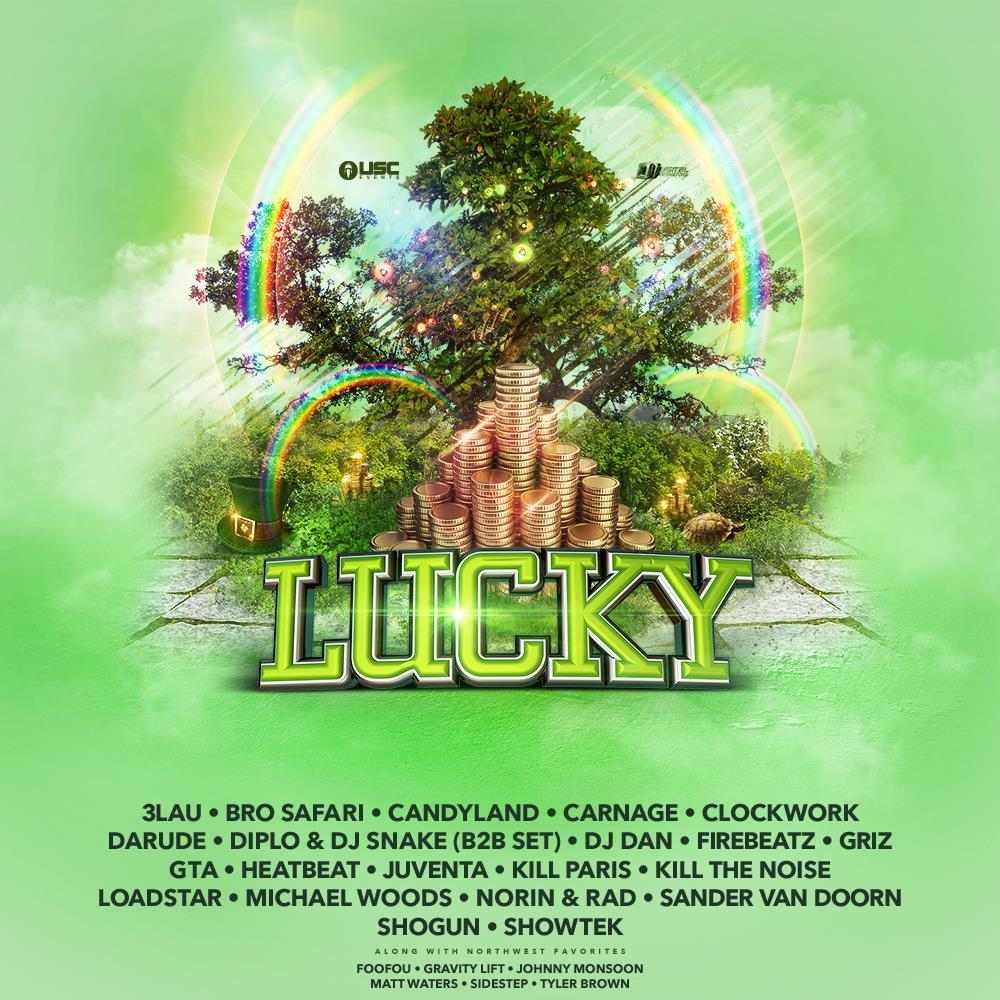 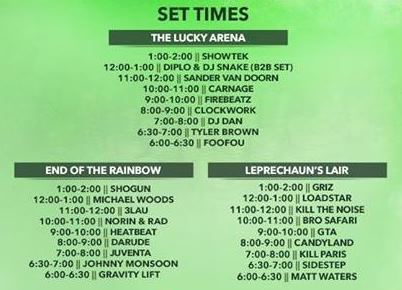 Phase II lineup announced 2/6/2014: 2014 is already shaping up to be an exciting year for Seattle and the entire Pacific Northwest region.  We feel very Lucky to be able to announce the rest of the artists that will join us on March 14th as the Emerald City is transformed into the Emerald Isle! Phase 2 Additions to the Lucky 2014 Lineup (In Alphabetical Order):  Candyland, Clockwork, Darude, Diplo & DJ Snake (B2B Set), DJ Dan, GTA,  Kill Paris, Michael Woods, Norin & Rad, & Shogun. Along With Northwest Favorites: Foofou, Gravity Lift, Johnny Monsoon, Matt Waters, Sidestep, & Tyler Brown In addition, you can now find all the information for our journey to the end of the rainbow on the Lucky 2014 website. Surf around to find all the rules, FAQ’s, volunteer info, attractions, ticket info, advice on what to do should you encounter a leprechaun and more!  Check it out now: www.LuckyFestival.com

Lineup announced 1/24/2014: You’ve all been anxiously awaiting Lucky 2014 information, so that makes today your Lucky day! Here is the first phase of artists providing the soundtrack to your Lucky adventure at the WaMu Theater on March 14th. In Alphabetical Order: 3Lau, Bro Safari, Carnage, Firebeatz, GRiZ, Heatbeat, Juventa, Kill The Noise, Loadstar, Sander van Doorn, Showtek, + more to be announced!

EmeraldCityEDM was planning to announce Lucky, the Pacific Northwest’s local favorite St. Patrick’s Day massive, when the lineup was announced. EmeraldCityEDM was told by USC Events that while last year’s Lucky was very bass oriented, this year’s lineup will be “very balanced”. The Lucky 2014 lineup is still “coming soon”, even though EmeraldCityEDM was told to expect it last week… but, just like a pot of gold at the end of the rainbow, the Lucky 2014 lineup remains elusive. Looks like we won’t be getting lucky with this year’s lineup quite yet but stay tuned to this post and EmeraldCityEDM for all things Lucky related! 2013 was a big year for USC Events, and 2014 promises to be just as big with the announcement of Paradiso and now Lucky in 2014. Remember that we as EDM fans are lucky in that USC Events uniquely times some of their massives to be outside of the standard festival season timing; Lucky and FreakNight are both held outside of the normal summer rave season. With that said, 2013 also brought some serious headliner failures to USC Events’ massives. The Crystal Method was booked for a live headlining slot at Paradiso 2013, but had to cancel due to health reasons. They are now touring again, EmeraldCityEDM hopes to see them rebooked for a makeup appearance in 2014. Even more probable for 2014 is Above & Beyond, who were not able to make Resolution 2014 due to weather issues and playing two shows in one night. Above & Beyond announced via twitter that they are working on timing for a makeup show in the Seattle area:

Seattle update: nothing concrete to announce as yet but wanted to let you know we’re still working on potential dates. More soon @uscevents — Above & Beyond (@aboveandbeyond) January 9, 2014

Seattle will be watching very closely to see what USC events has in store for us in 2014. Without further ado, let’s announce this year’s Lucky! Note that the timing this year has changed to be from 6:00pm-2:00am, and no re-entry or smoking will be allowed. This post will be updated with more information as it is announced. Find Lucky after parties and stay up to date on upcoming public electronic dance music events in the Seattle area by following the EmeraldCityEDM Event Calendar.

Announcement Press release:  USC Events presents Lucky 2014!  As springtime in the Northwest begins to blossom, we are once again ready to celebrate our good fortune and dance late into the night in an Irish folklore inspired playground for the senses!  This March, join USC Events on St. Patrick’s Day weekend as we journey once again to the end of the rainbow! Enveloped in a world of green and gold, thousands of the luckiest people in the Northwest will come together to dance and celebrate in true Irish fashion as we transform the Emerald City into the Emerald Isle!  The annual promise of a diverse lineup, magical creatures, and over-the-top production has turned Lucky into a fan favorite event. Grab your green and gold garb and gather your lucky charms as we start planning our Celtic adventure!  Get Lucky with us on March 14th!