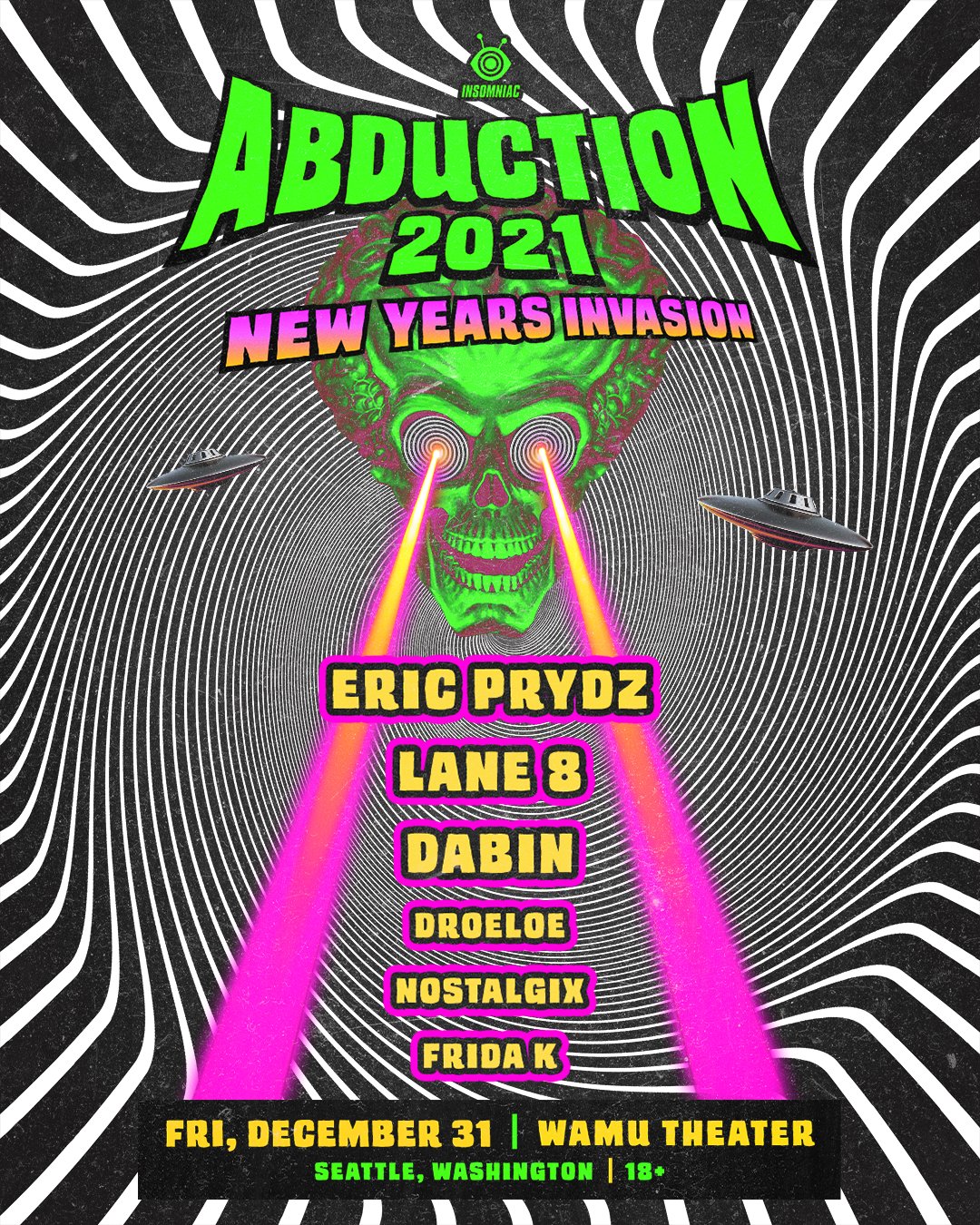 12/28/2021 Update: We are very sad to announce that Insomniac Northwest’s NYE event with Eric Prydz at The WaMu Theater has officially been canceled: Galactic news flash!!! Extraterrestrial alien #Abduction2021 New Years Invasion is landing in Seattle on Friday 12/31. Prepare to get beamed up to the mothership as you enter a scene filled with lights, lasers, and cosmic sounds unlike anything you’ve encountered on Earth! Experience a full night of genre-bending galactic radio noise that will put the Wow! signal to shame! Prepare for a night of fun with friends as you dance through tractor beams and space noise! Will you make it out without being abducted? -Insomniac Events

A limited number of presale tickets will be available Friday, October 29th & Saturday, October 20th at the WaMu Theater Box Office starting at $89.99 (cards only) with general tickets on sale November 4th at noon PST. VIP is also available for age 21+. Save $ on service fees by purchasing tickets directly at the Lumen Field Box Office open Thursday, Friday and Saturday from 10am-2pm (cards only, no cash accepted).

Eric Prydz (Sweden): For over ten years, Eric Prydz has been synonymous with immaculately produced and unique sounding electronic music. The Platinum-selling producer is responsible for some of the biggest progressive house tracks of the last decade, not to mention some of the most technically impressive live shows of any touring artist. As a solo artist, Prydz has headlined some of the world’s most storied venues, from Madison Square Garden to Brixton Academy and Alexandra Palace, earned multiple Grammy nominations, hosted an ongoing radio show for Beats1 and topped charts with his alter-egos Pryda and Cirez D. Despite the headline-grabbing shows and releases, Prydz remains reclusive. It’s his dedication to his craft as a producer and DJ that leaves him in the highly enviable and singular position of appealing to dance music’s underground connoisseurs and main-stage masses alike. Residing in Los Angeles, Eric Prydz continues to set himself apart in electronic music through his visceral productions and exhilarating live shows.

Proof of vaccination or a recent negative Covid test result is required for entry, read more about the Covid guidelines and what tests are accepted here.

Bags larger than the size of a hand must be clear.

Save $ on service fees by purchasing tickets directly at the Lumen Field Box Office open Thursday, Friday and Saturday from 10am-2pm (cards only, no cash accepted).