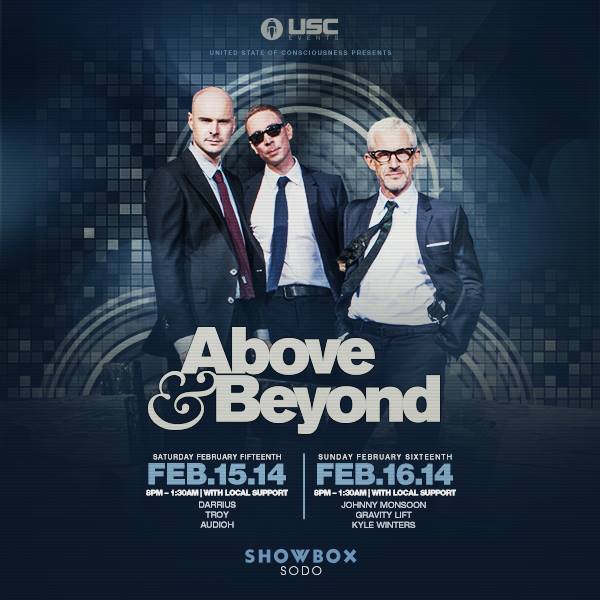 Above & Beyond: Resolution Makeup Shows

USC Events announced information over the weekend about Above & Beyond‘s Resolution makeup shows, which will be held this coming weekend at the Showbox Sodo.  As we all know, Above & Beyond was not able to perform at Resolution 2014 due to flight issues resulting from weather and the travel time involved with playing two NYE shows in one night.

Links & Tickets:  Tickets will be available to purchase TODAY at noon PST.  Only 2 non-transferable tickets will be allowed per purchaser. Tickets will be sold online only and will be available exclusively for pickup via will call at the event. The credit card holder who purchased the tickets online will be required to show their ID with the name matching the online purchase upon entry.  Note that per the USC Events press release, tickets are supposed to be 12$ each but per the AXS ticketing website do appear to be priced at 14$.  Also note that the ticket prices are before processing fees.

Criticisms:  USC Events is being criticized for the way it is handling the makeup shows:
-Short Notice:  Information about the makeup shows was announced with very short notice.  Announced over the weekend, with tickets going on sale on Monday, for shows that will be held the following weekend is not nearly enough notice for many fans.  This short notice also does not leave much time for out of town fans to make travel plans.  Understand that a very large number of people from the PNW made plans to travel to Seattle to experience Above & Beyond on NYE.  Many of these fans will not be able to attend the makeup shows with such short notice.

EmeraldCityEDM notes that the majority of Resolution 2014 attendees saved their ticket stubs in hope of priority access to the promised makeup show. Additional effort would have been required in order for USC Events to prioritize Resolution 2014 attendee, but this is not impossible. USC Events could have offered make-up show tickets in exchange for hard copy resolution ticket stubs, and or restricted ticket sales to those who purchased Resolution tickets electronically before opening sales to the public. USC Events chose not to make these efforts. However, it does appear that USC Events is doing what they can to keep ticket prices low by not making any profit off of the makeup shows. Additionally, anti-scalping methods are in place to ensure that tickets are sold only to actual fans.

-Original Booking:  Should USC Events even have booked Above & Beyond as a headliner for NYE?  It is very common for artists to play multiple events in one night, especially on holidays. However, in most of these cases the shows are at least in the same geographic area, or if the group is a multi-person group they will split up in order to assure attendance at each event.  In the case of NYE 2014, Above & Beyond played earlier in the evening in Colorado, and did not split up.  In EmeraldCityEDM’s opinion, this should have been a major concern by event planners as Above & Beyond was not splitting up and was playing earlier in the evening across the nation during the winter where weather issues are common.

Praise:  USC Events is “exploring a larger festival appearance in the region later in 2014 for Above & Beyond”!  Hopefully this is a reference to Paradiso 2014, stay tuned to EmeraldCityEDM for all Paradiso 2014 updates, and any further information about Above & Beyond. Stay up to date on upcoming public electronic dance music events in the Seattle area by following the EmeraldCityEDM Event Calendar.

Full USC Events Press Release & FAQ (announced via Facebook and the USC Events website):   To all the Above & Beyond fans in Seattle,  Following the disappointment of NYE, we’re pleased to announce the first of your long-overdue Group Therapy sessions via two nights at Showbox SoDo on February 15th and 16th.

Tickets for these shows are priced at $12 (plus fees) and will go on sale at 12pm PST Monday, February 10th. Neither Above & Beyond nor USC Events will be taking a fee from these shows – the cover charge will go solely towards venue, production and staffing costs. Several measures have been taken to ensure the tickets only go to real fans. There will be a limit of 2 tickets allowed per purchaser. These tickets will be sold online only and available exclusively for pickup via will call as patrons enter the event. These tickets are non-transferable. The credit card holder who purchased the tickets online will be required to show their ID with the name matching the online purchase upon entry.

Some of you may have traveled a long way to see Above & Beyond on NYE and will be unable to attend either of these shows. Others might miss out on the opportunity to purchase tickets or will be unavailable on these dates. It’s an unfortunate reality that these two shows may not satisfy everyone who’d hoped to see Above & Beyond perform on NYE. In the end there really was no perfect solution to this situation and with limited date and venue options available, we felt the most important thing was to take action and do another Above & Beyond show in Seattle as soon as we could.

With that in mind, we wanted to let you know that we’re also exploring a larger festival appearance in the region later in 2014 for Above & Beyond. We’ll bring you more news on that as soon as we have it.

Thank you for your patience and understanding and we look forward to finally being able to bring some Group Therapy to Seattle on February 15th & 16th.

3. Why aren’t you doing this show at a bigger venue like WAMU?
All venue options and possible dates in the region were explored and exhausted. After much deliberation we felt that these two shows in February, followed by a major festival appearance later this year was the best way to reach as many of the Northwest’s Above & Beyond fans as possible in 2014.

4. Can I buy tickets to both nights?
Technically, this may be possible, but given the goal of these shows, we would politely request that you pick one night only, to ensure as many fans get the chance to buy tickets

5. It’s going to be incredibly busy/long lines with everyone needing to pick tickets up via will call. How early before show time may we be able to pick up our tickets?
Additional staff will be brought on to make the will call pickup process as quick as possible on both nights.