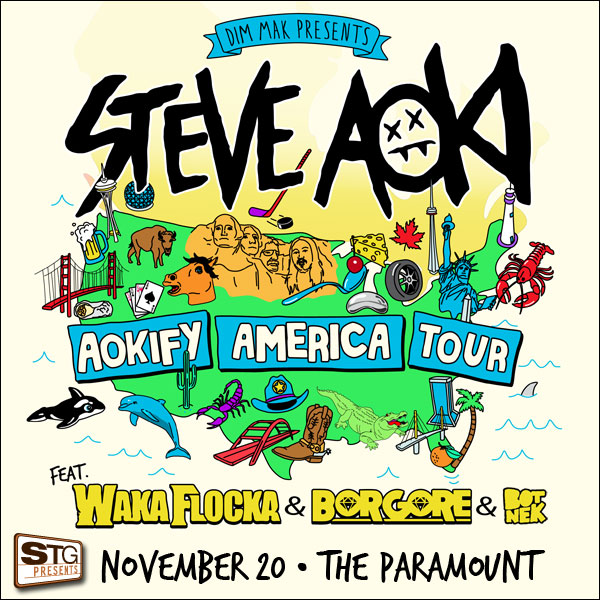 Aoki and the Aokify America Tour bring the freshest talent in electronic and hip-hop music to the forefront with direct support acts Borgore and Waka Flocka Flame. Together, the threesome leads the pack in their respective genres and will showcase a diverse lineup rarely seen in the dance music circuit today. Blending Borgore’s bass-in-your-face antics, Waka Flocka Flame’s hip-hop bravado, and AOKI’s chart-topping smash hits, the Aokify America Tour will be one of this year’s most anticipated events. Grammy Award-winning producer and singer/songwriter Pharrell Williams—the current king of summer and producer/featured artist behind this year’s biggest tracks “Blurred Lines” from Robin Thicke and “Get Lucky” from Daft Punk—joins the Aokify America crew on select dates.

“I literally spend the majority my life flying from show to show, but last year’s Deadmeat Tour opened my eyes to the level of performance and production I can achieve with a traditional bus tour,” says AOKI. “So when it came to planning a new tour for 2013, coming off the biggest year of my career, I knew I wanted to up the ante on every level.  With Aokify America, we’ve increased the production, gone into some of the best and largest venues, and brought along an amazing lineup including two of the hottest artists in their genres, Borgore and Waka Flocka Flame.  And of course with the year Pharrell is having, hearing he was able to jump on some of the shows was an honor all its own.”

Stay tuned to the EmeraldCityEDM Contests & Giveaways page for your chance to win free tickets to Seattle shows, including Aokify (giveaway coming soon). Stay up to date on upcoming public electronic dance music events in the Seattle area by following the EmeraldCityEDM Event Calendar.