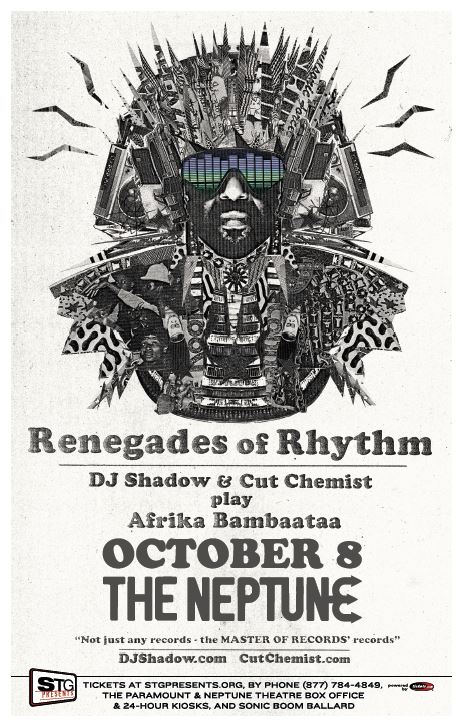 *Save on service fees by purchasing tickets in person at the Paramount’s box offices or 24hr ticket kiosks.

Win Tickets: Win a pair of tickets to this show c/o STG Presents & EmeraldCityEDM!  You can enter once per day, per email address.  Share your entry on Twitter or Facebook for additional entries!  Enter to win here:

“This has never been done before, definitely not on this scale. They’re HIS records, with his blessings. This isn’t just ANY copy of ‘X’ breakbeat, it’s THE copy, THE copy that started everything. Not just any records, the MASTER OF RECORDS’ records.” – DJ Shadow.

Using only vinyl pulled from Afrika Bambaataa’s historic collection – over 40,000 strong and permanently archived at Cornell University – DJ Shadow and Cut Chemist aim to presents Bambaataa’s legacy in all its genre-busting and socially-minded complexity. DJ Shadow states, “His collection includes not just Soul and Rap, but also Soca, Calypso, Dub, Salsa…it’s obvious that this music was important to him, and it’s reflected in his own music. For example, when the Soulsonic Force is singing an African chant, it actually comes from a Manu Dibango record. That’s when being a crate-digger comes in handy – you have to be able to pick up the references and reiterate them.”

Johan Kugelberg, who in 2007 established the Cornell Hip Hop Archive, and a member of Zulu Nation, brought the idea of this tour to Cut Chemist and DJ Shadow, and introduced the two to Afrika Bambaataa. “Hip Hop ultimately is multi-generational and communicative, and an ongoing grassroots network” he says. “This tour will bring together hip hop fans over generations”