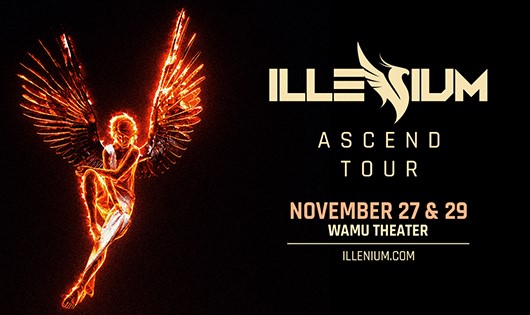 Ascend will be Illenium’s third full length album, following Ashes and Awake. Ascend will be the last chapter in a trilogy about overcoming challenges, represented by the fiery phoenix. Ascend will be released this August, pre-order here.

Pre-order Ascend to get access to the exclusive pre-sale for the tour Wednesday 6/19 at 10am PST.

Additionally, Illenium tweeted that the Ascend Tour may be the last time he performs live with Said The Sky, Dabin and Day Gatsby:

I’m so stoked for every one of these guys and their solo careers are taking off and because of that, The Ascend Tour may be the last shows we all embark on together and perform as a full live show.”

We will update this post as soon as supporting acts are confirmed.

*Purchase tickets in person at the CenturyLink Field box office to save $ on service fees.

Both shows are all ages with doors at 8pm.

No vertical IDs accepted at the bars.