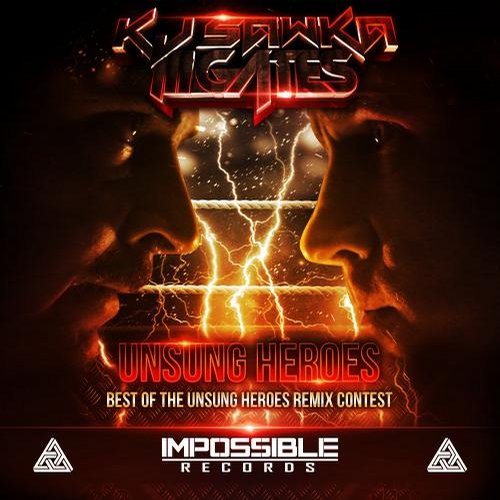 EmeraldCityEDM first announced the Unsung Heroes Remix Contest in 2015; today we are pleased to announce that Grid Division from Oakland CA is the winner! There were many entries, and Impossible Records is very excited to share a compilation EP (see below) of the ten best entries with the world. About the EP, Ill Gates stated to EmeraldCityEDM:

I’m writing to let you know KJ Sawka (Pendulum/Destroid) and I just dropped a big release. We held a remix contest and over 500 tracks were submitted. Shit was crazy. We waded through all of the entries, narrowed it down to the 10 very best submissions, and put out this heroic remix EP. The winning producers are mostly unknown and extremely talented. The high quality of their work is immediately apparent from the first listen. For many of those that entered our contest, this remix EP is their first release. -Ill Gates

Following the launch of their new project KJ Sawka vs. iII.GATES ‘live midi battle’ Sawka and Gates released their first ep ‘UNSUNG HEROES’ and smashed the charts staying strong at #1 for two weeks in multiple categories and sparked a massive north American tour for this dynamic duo. To top it off they teamed up with Dubspot.com and launched an epic remix contest for their chart topping single ‘Unsung Heroes’ which received over 500+ entries from producers around the globe and included 13k+ in prizes! This compilation features their top 10 picks, plus a remastered original mix to start off the EP.

1st, 2nd and 3rd place winners Grid Division, Swoon X Kris Cayden and Beard Monster created remixes that are complex, glitchy, include vocals, hooks, lethal drops and heavy dub step all driving you through countless styles of four and half minutes of pure genius. The top ten winning tracks include such wide range of musical tastes from heavy dub step to super crafty glitch there’s sure to be something for everyone:

Purchase the Best of the Unsung Heroes Remix Contest EP on:
iTunes
Beatport