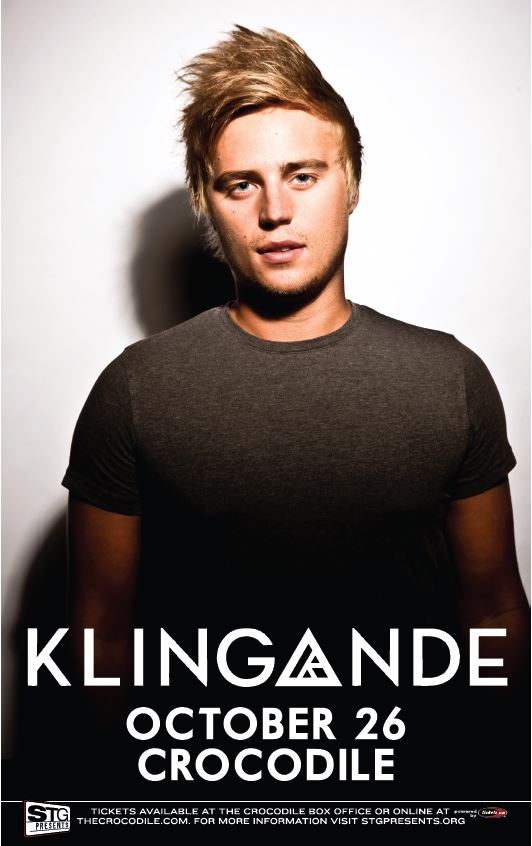 *Purchase tickets in person at the Crocodile box office to save $ on service fees.

Stay up to date on upcoming public electronic dance music events in the Seattle area by following the EmeraldCityEDM Event Calendar and enter to win tickets to local EDM shows by following the Contests & Giveaways page.

WIN TICKETS to this show c/o STG Presents & EmeraldCityEDM:
(If the giveaway does not load, enter to win online here: http://ptab.it/3Vrze)

About the show: STG Presents Klingande at The Crocodile in Seattle on Sunday, October 26, 2014.

After hitting #1 at Hype Machine (twice!), receiving 30 million combined views across YouTube, an additional 6 million plays on Soundcloud, French duo Klingande are poised to release their UK debut single ‘Jubel’ on May 11th on One More Tune. ‘Jubel’ is already a massive success in Germany after spending 5 weeks at #1 and is firmly established as a huge international smash hit with #1 placings in 15 countries as it became the most Shazamed track across Europe. Its popularity has since spread globally maintaining its Top 10 position in Shazam’s Global Chart for several weeks now. Commencing with a simple percussive introduction, ‘Jubel’ gradually layers together textures of sound before the track’s inimitable saxophone hook bursts to the fore to create a euphoric summer house atmosphere. The song also features sultry vocals from an unnamed guest singer. “With ‘Jubel’, we wanted to bring love, happiness and this summer feeling to people,” they explain. “We love using the saxophone because it’s a powerful instrument with a warm sound that expresses different emotions and feelings.”

Both Klingande and ‘Jubel’ are named after Swedish words due to the duo’s love of the nation’s house music: ‘Jubel’ meaning joy, and Klingande taken fron the word for sounding. Formed in December of last year, Klingande consists of childhood friends Cédric and Edgar, two 23-year-olds from Croix in northern France who formed the duo after being united by their love of electronic artists such as Klangkarussell, Bakermat and Nico Pusch. Since January 2014 Edgar decided to spend time on his own projects, still spend time in studio and make some melody for Klingande. Cédric studied music theory as a child, but later became immersed in electronic music as a teenager; initially a DJ, he soon also began to work on his own original productions. The pair first met at school at the age of ten, but reconnected late in 2012 when Cédric returned from a spell in London and made fresh contact with his old friend.

Klingande have spent much of the year touring throughout Germany, Sweden, France, Belgium, Switzerland, Ireland, Austria, Romania and the Netherlands. His new single to be released in mainland Europe was ‘Punga’, another track which features their distinctive house-meets-saxophone sound and also earned a huge online following. Now Cedric is touring and make the show with Flute and Sax live everywhere in Europe and soon in US. Edgar is focused on music, spending time on his piano. Edgar also takes time for his own project but stay involve in the production process of Klingande.