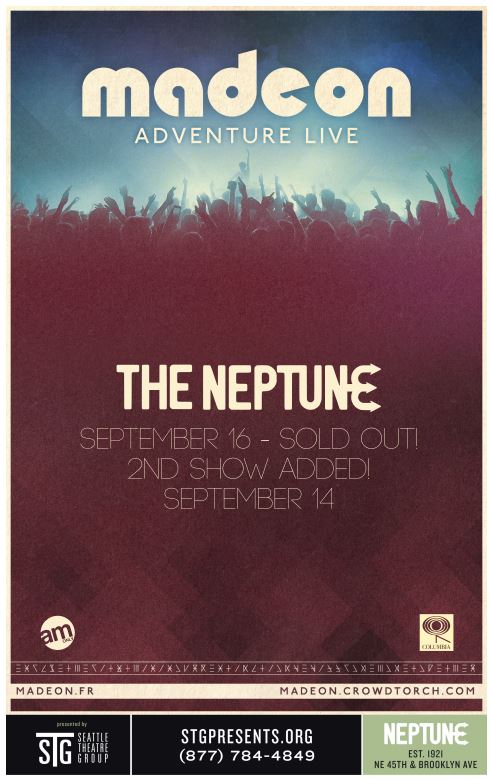 STG Presents Madeon: The Adventure Live Tour at The Neptune on Wednesday, September 16, 2015!

UPDATE:
The first show has sold out, a second show on Monday, September 14th has been added!

Born in Nantes 21 years ago, Hugo Leclercq aka Madeon was introduced to electronic music aged 11, when he came upon a documentary about Daft Punk. A few years later, his breakthrough came by entering and winning an online remix competition for drum’n’bass band Pendulum. His repositioning of their ‘The Island’ single won global applause. Hugo then went on to remix the Deadmau5 “Raise Your Weapon” single Martin Solveig’s “The Night Out”.

His Pop Culture (the celebrated video featuring him live mixing 39 different tracks, featuring everyone from ELO to Britney Spears, into three and a half minutes of music) has now been played over 30 Million times on Youtube. He’s also found his production skills called upon by some the biggest names in pop: alongside his credits on records by Muse, Ellie Goulding and Two Door Cinema Club, Coldplay as well and producing and co-writing three songs on Lady Gaga’s Artpop album.

Fast forward to 2015 with a string of acclaimed singles under his belt as well as touring around the World playing at festivals such as Coachella to Lollapalooza, his stunning debut album, ‘Adventure’, arrived at the end of March 2015 and went straight to Number 1 on the Billboard Electronic/Dance album chart.