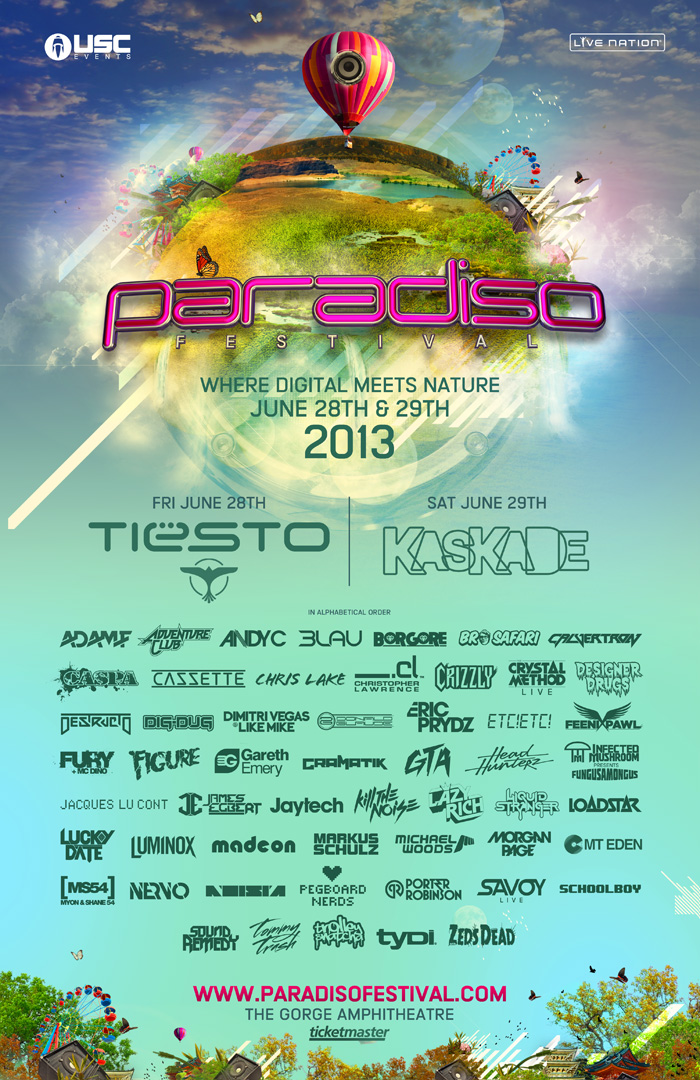 Tickets:  Per press release issued May 8th, 2013 via Facebook, Twitter, and the Paradiso Festival official website:  “2-day passes for Paradiso Festival 2013 are selling very quickly and we expect the festival to sell out well in advance this year! If you haven’t purchased your pass yet, we recommend doing so as soon as you can so you do not risk missing out. Once all the passes sell out, no more will be offered.  Last year Paradiso Festival became the biggest dance music event ever staged in the Northwest and this year it will break records once again! This is your chance to be a part of USC history and celebrate dance music at the most gorgeous venue in the world.  Get your tickets soon because Paradiso Festival 2013 will not be complete without you!”  Purchase tickets online here, physical tickets previously available at outlets are no longer available.

USC Events is offering some pretty sweet VIP packages, but they come at a price.  There are two types of VIP packages offered, and they include the following (in addition to everything a GA ticket offers):

Camping:  The Gorge Campground will open for Paradiso Festival on June 27th at 3pm and remain open through June 30th at Noon.  Camping passes are per vehicle, NOT per patron.  Premiere and Terrace camping are sold out, but general camping is available to purchase online here.  In the past, the Gorge has typically offered camping passes for purchase on site, thus allowing you to save money by not paying the Ticketmaster fee for camping.  EmeraldCityEDM inquired of USC Events as to the pricing for camping at the venue and was told that this pricing is determined by the Gorge.  EmeraldCityEDM has multiple inquiries out to the Gorge regarding the price and expected availability of camping passes for purchase on site, to no avail.  I will add this information to the comments section on this post and to the EmeraldCityEDM Paradiso Page if and when the Gorge responds.   Find all camping information on the Paradiso Festival official website camping FAQ page.

Reentry:  General Admission tickets do NOT include reentry (for the day entered), but VIP tickets include unlimited reentry.

Lineup:  No additions or deletions to the lineup have been announced as of the writing of this post.  Set times will be released closer to the event.   Explore the lineup on the Paradiso Festival official website lineup page.

Stay up to date on upcoming public electronic dance music events in the Seattle area by following the EmeraldCityEDM Events Calendar. See you at the Gorge!