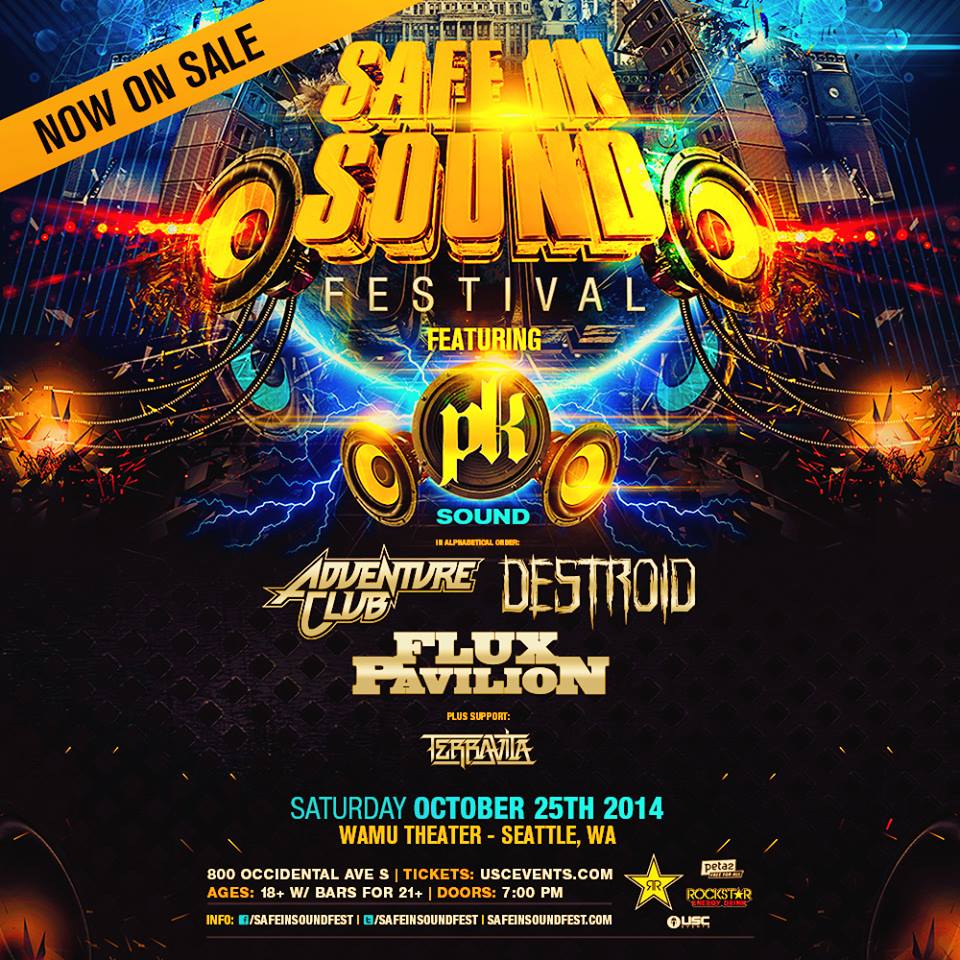 Safe In Sound with Destroid, Flux Pavilion, & Adventure Club at the WaMu Theater!

Update RE PK Sound: After previously stating that PK sound would no longer be present at the Seattle stop of Safe In Sound, USC Events has BACKTRACKED and now confirms that Seattle WILL BE GETTING PK SOUND, as also promised by KJ Sawka of Destroid. Great news, now we can all relax and enjoy the bassgasm :).

Press Release: Safe In Sound, a touring festival with a 150,000 watt PK Sound will make you feel the pounding in your chest and a rumble underneath your feet. A first of its kind festival experience, Safe In Sound will hit 20 cities in September and October, setting a new standard for bass music presentation. Each Safe In Sound tour stop will feature a blend of massive bass-heavy artists and headliners with line-ups varying by date.

“Knowing this is the first ever touring bass music festival of this caliber AND the first time my PK family unleashes their brand new sound system, people are going to lose their sh**!” – Excision.

Safe In Sound Festival will take over amphitheaters, arenas, ballrooms and various outdoor venues. PK Sound, already renowned for providing monster systems for Skrillex’s FullFlex Express Tour, Excision’s Executioner Tour and the Shambhala Music Festival, has set a new benchmark for the industry. With a brand new 150,000 watt rig debuting on the Safe in Sound Festival, PK promises to have built the most powerful touring sound system ever used for an EDM tour.

Safe In Sound is brought to you from the production team at Synergy Global Entertainment (SGE) whom produce a plethora of music and entertainment festivals throughout North America including Identity Festival, Funny or Die’s Oddball Comedy & Curiosity Festival, Knotfest and Rockstar Mayhem and Uproar Festivals among others. Safe In Sound is proud to partner with Rockstar Energy Drink and Peta2 for the inaugural year of the festival.

Stay tuned to this post for more information and any other news about the event.  Don’t forget to stay up to date on upcoming EDM events in the Seattle area by following the EmeraldCityEDM Event Calendar, and enter to win free tickets to local EDM shows on the EmeraldCityEDM Contests & Giveaways page. Are you ready to get Destroid!?!!!!