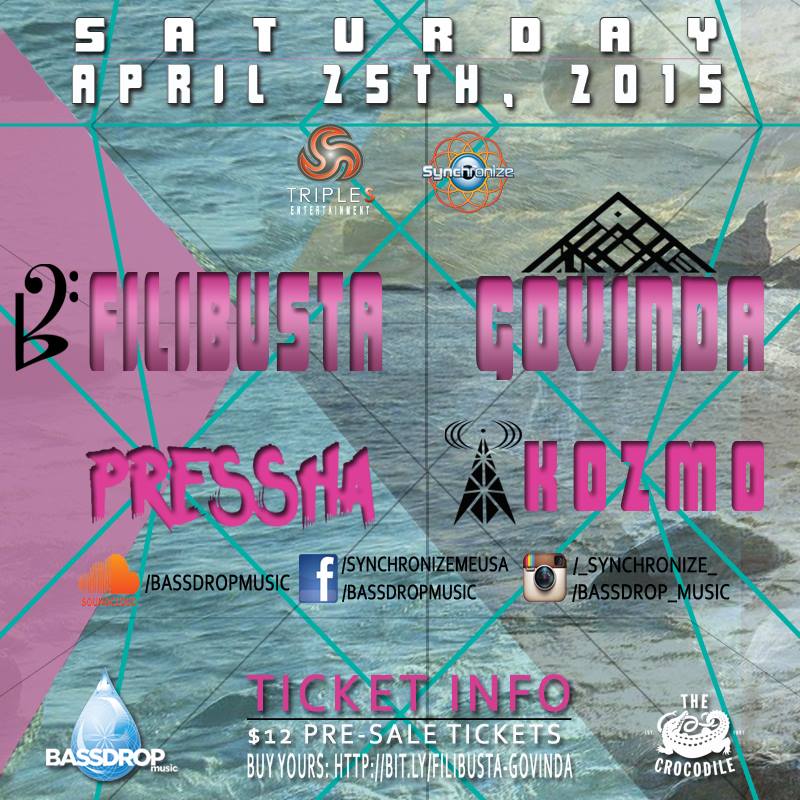 Triple S, Synchronize and Bassdrop Music proudly present an evening with a whole bunch of forward moving musical minds! Join us for sounds and sights from Govinda & Filibusta with Pressha & Kozmo at the Crocodile on April 25th.

Govinda has played with Thievery Corporation, Tipper, Bassnectar, Shpongle, Cheb I Sabbah, STS9 and many more and been featured on over 25 compilations such as Buddha Bar II, Asian Travels II, and Nirvana Lounge selling a combined 400,000 copies. Govinda has played at numerous festivals throughout North America including Coachella, Lightning in a Bottle, Sea of Dreams, SXSW and more. Govinda’s music has been on TV including stations like WB, MTV and Bravo as well as many independent films. The Govinda live show immerses the audience with a textured atmosphere of exotic, dubby vibrations interwoven with cosmic visual projections, world class dancers and mesmerizing vocals- all to the magic of his live electronics and violin.

Midwest-based producer Troy Probst, also known as Filibusta has been recognized for his innovative approach to his music, dynamic live show, and a flare for complexity and diversity; pushing new boundaries, bouncing through genres from glitch, trap, dubstep and future funk.

Filibusta No Handouts Spring Tour: Filibusta has announced a headlining, No Handouts Spring Tour. The tour is in support of his newest EP, Set Lasers To Funk vol. 1 which is scheduled for release on April 20th, 2015; the first in a three EP series scheduled for release throughout 2015 on Adapted Records. Highlighted by festival stops at Summer Camp, Bloomtown, Sonic Bloom, Firefly, Serenity Gathering, & Rabbits Eat Lettuce (AUS), No Handouts, will make 30 stops across the U.S., featuring the Filibusta live experience with a trumpet and guitar.

Throughout his young career, Filibusta has been recognized for his innovative approach to his music, dynamic live show, and flare for complexity and diversity; pushing new boundaries in Future Funk, incorporating elements of Glitch, Dubstep, and Trap. Named #1 Top Up and Coming EDM Artist of 2014 by TheUntz.com, Filibusta had a breakout year in 2014, turning heads at renowned festivals such as Summer Camp, Wakarusa, Lightning in a Bottle, Sonic Bloom, Electric Forest, Infrasound, and SXSW. Continuing that momentum in early 2015, Filibusta has been featured as support for acts such as Manic Focus, and the Floozies.