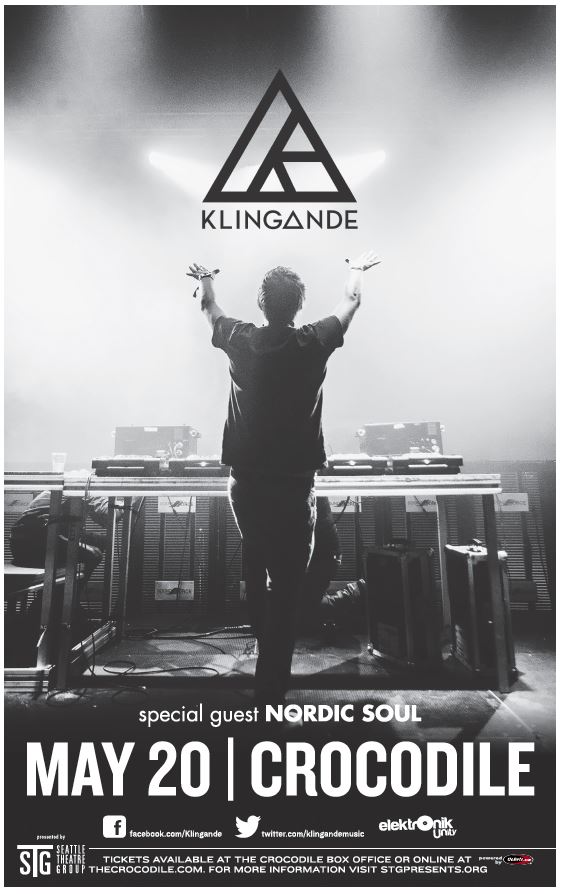 Klingande at the Crocodile

STG Presents Klingande at The Crocodile in Seattle on Wednesday, May 20, 2015.

Both Klingande and ‘Jubel’ are named after Swedish words due to the duo’s love of the nation’s house music: ‘Jubel’ meaning joy, and Klingande taken fron the word for sounding. Formed in December of last year, Klingande consists of childhood friends Cédric and Edgar, two 22-year-olds from Croix in northern France who formed the duo after being united by their love of electronic artists such asKlangkarussell, Bakermat and Nico Pusch. Cédric studied music theory as a child, but later became immersed in electronic music as a teenager; initially a DJ, he soon also began to work on his own original productions. Edgar first started playing the piano at the age of sixteen and was so enamoured that he spent four years studying the instrument. The pair first met at school at the age of ten, but reconnected late in 2012 when Cédric returned from a spell in London and made fresh contact with his old friend.

Klingande have spent much of the year touring throughout Germany, Sweden, France, Belgium, Switzerland, Ireland, Austria, Romania and the Netherlands. Their new single to be released in mainland Europe is ‘Punga’, another track which features their distinctive house-meets-saxophone sound and also earned a huge online following. After hitting #1 at Hype Machine, receiving over 5 million views at YouTube and an additional 1.5 million plays on Soundcloud, French duo Klingande’s ‘Jubel’ is already a huge success in Germany after debuting at #5 at iTunes and reaching #1 at Shazamthey are now #1 in overall charts since a few weeks in Germany, Switzerland, Austria, Luxembourg and coming in Italy, Belgium, Sweden…

Commencing with a simple percussive introduction, ‘Jubel’ gradually layers together textures of sound before the track’s inimitable saxophone hook bursts to the fore to create a euphoric summer house atmosphere. The song also features sultry vocals from an unnamed guest singer. “With ‘Jubel’, we wanted to bring love, happiness and this summer feeling to people,” they explain. “We love using the saxophone because it’s a powerful instrument with a warm sound that expresses different emotions and feelings.”

Wednesday, May 20th 2015
all ages
Local support by Nordic Soul

TICKET GIVEAWAY: Enter to win a pair of tickets to this show: