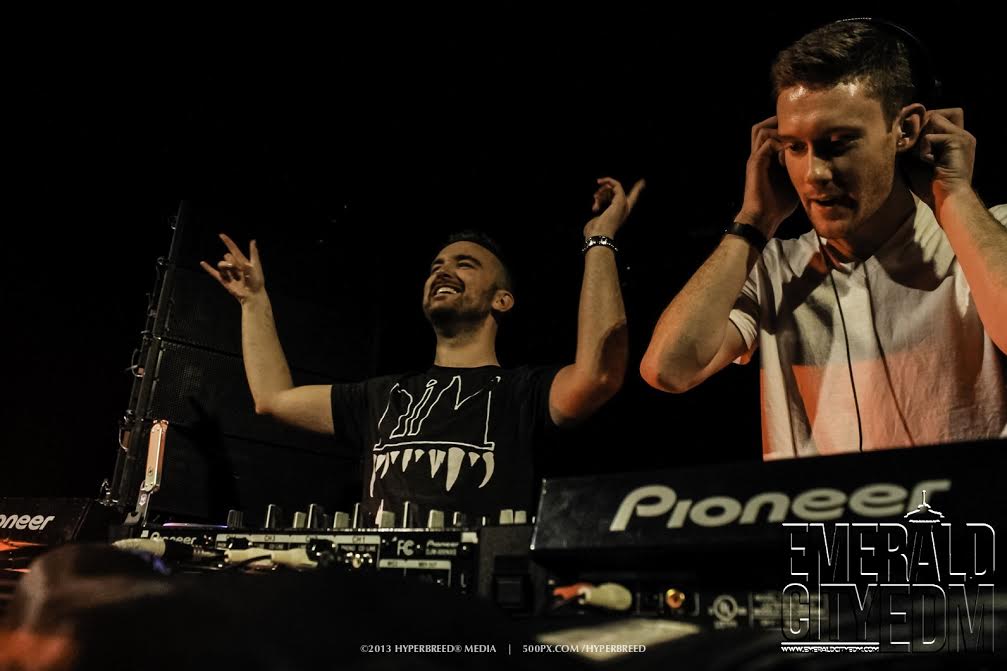 Botnek is Gordon Huntley & Erick Muse of Halifax, Nova Scotia, Canada.   EmeraldCityEDM was fortunate enough to sit down with the duo after their opening set at the Seattle stop of the Aokify America Tour with Steve Aoki, Borgore and Wacka Flocka Flame.  View the full photo gallery. 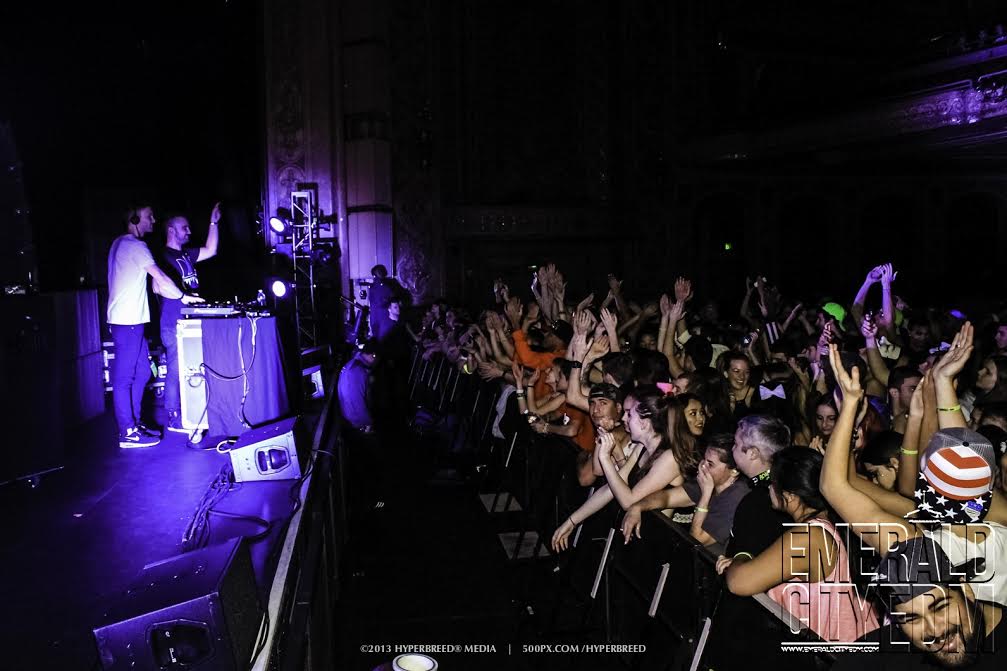 ECEdm: So, what did you think of your set?

Botnek (Gordon):  It was fun, it was crazy. That was one of the first time people were cheering as we walked on to the stage, everybody in the front was like “AHH BOTNEK” and pointing at us when there was not even sound happening.  There was silence in the room, then people were just jumping up and down from the very first track.  I  thought “people came here to fucking party!”   It’s all ages here too, so there were young kids out there just raging, like a ten year old kid in the front row.  There was one kid up there with Wacka and that kid was amazing, awesome, then Wacka brought him on stage and he was up there – you know he’s going to grow up and be a rapper now!

ECEdm: So that was pretty new to have people rocking out right off of the bat? You guys have played at some pretty big gigs…

Botnek: Yeah, this is a legendary club, my dad was super impressed and saying “I don’t know about this music that you make… but you know son, The Guess Who did their album there so consider that a “good job”.  Just kidding, he didn’t say anything but he was impressed that were playing here.

ECEdm: So where are you from? I know that you’re based out of Montreal.

Botnek: Yes, we were born in Halifax, Nova Scotia.  If you know the “Trailer Park Boys” you know where we’re from. Most of the show was filmed and made within walking distance of where we grew up.  It’s a parody show but it’s pretty close to reality, when we get to drinking we start talking like that. Montreal is super french but there are two universities there so it’s both, everywhere you go it “hello, bonjour”.  Montreal is a very cultural city.

ECEdm: How did you two meet?

Botnek: We met on Grindr!  Just kidding, we’re not gay at all, not that there’s anything wrong with that, but we met at a party in Halifax, maybe five years ago.  I (Gordon) was DJing for a friend’s birthday and was trying to learn how to DJ.  I had no idea what I was doing and I was like trying to figure this shit out.  I was doing it all in Ableton, and Erick saunters over and asks “what’s that Ableton you’ve got there, I know all about that” and I was like “NO REQUESTS”.

Then we got to chatting and we would talk about tracks, Erick was doing tracks and I was trying to do tracks so we started sending each other stuff.  I could see right away that that Erick was really good with the technical shit, and I was like “Whoa, how the f**k do do you make your music sound like this” and then “You should work on some melodies son, you’ve got like one note”!  Erick is a techno head, he would select one note, like F#  for the day.  So, that’s how we met and we’ve been making music ever since as we’re stubborn as hell.

ECEdm: Was it always electronic?

Botnek (Gordon):  No actually, you know whats funny is that I started in metal bands, when I was in high school. Then I got into ambient music and experimental electronic music and that’s how we got into the electronic stuff.  I’ve tried all kinds of stuff, I’ve even been in a folk band, but I’ve always just really liked music with energy in it. I’m always gravitating towards stuff that’s super high energy. That’s why when we were out there tonight, it was just great.

ECEDm: Your music has some great energy. 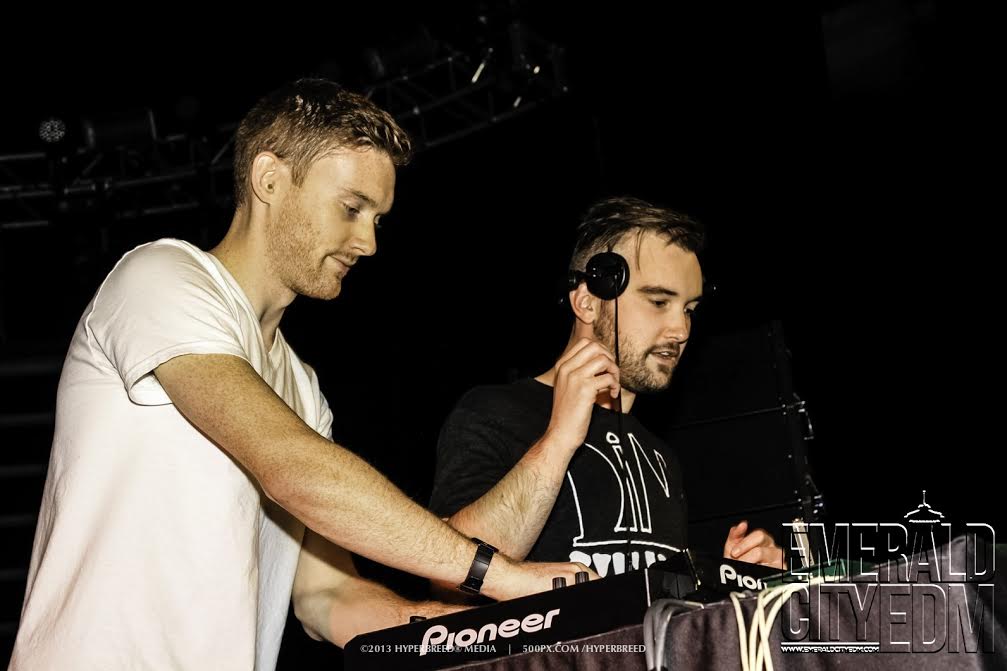 ECEdm: We like the new track, “I Know”. I think that one’s going to get you a lot of attention, with that hook and that energy and beat – it’s exactly what’s hot right now.

Botnek: We made it a long time ago, we have two great stories about this track.  First story: we were drunk on our first European tour, in the hotel room after an Italian show in Milan and Erick’s like going through demos, that’s our favorite time to go through demos – when you’re drunk, it’s the best way to cull your demos. At the time we were doing something more tropical almost, more underground music, more of an underground beat.  This is when we were starting to play shows and EDM was just starting to come along.  We were starting to play this music and noticing that people were loving it and Erick said “Look, I made something cheesy like that music!” I thought “what the hell, listen to those chords, we’re not just a few notes anymore!” and it grew from there.

We get surprised by the reach that happens with with our tracks, we don’t know how people even find them.  We were listening to BBC Radio 1 and Avicii did a takeover show and said “Here’s one of my favorite new tracks, its by Botnek and its called “I Know”.  I was like “What , why is Avicii playing Botnek music, has he been tricked?”.  He did a little guestmix for Pete Tong’s show and it was like 6 tracks, Avicii Avicii Avicii Avicii, Botnek, and I thought “‘this is not real life”.  Erick: “of all things to choose, you’re foolish sir” (joking).

ECEdm: We have a question from a fan about a track called Owls. What can you tell me about that track, and was it or will it ever be released?

Botnek: That track!  It will be released, but not under our name – its under another project now. That song is the pinnacle of the style that we were making, with big kicks and bleepy bloopy noises like dutch house. We did that track trree or four years ago, on new years, and it was one of the first tracks that we ever made. It’s funny because this track has haunted us since we made it,  we made so many changes to it because we were still earning how to make music, so every time we learned something new we would apply it to this track because we thought that it was so special.

For a while we thought that it was coming out and we met Annie Mac, in Montreal, and gave her that track because we thought that it was going to be this cool and unreleased track.  She plays it on Radio 1 and everyone’s like what is this? It’s so funny that it never came out. It was supposed to come out on Chuckie’s label, but they dropped it, then somewhere else and we eventually gave up on it. People are still asking for it for it, so it is going to come out now.  It doesn’t sound like Botnek now, it doesn’t sound anything like us now, but we eventually rendered rendered it and thought “Ok, it sounds good now but its not under Botnek”.  Google “GOOBA”, you wont find anything right now, but it will be out, soon, and you can get your OWLS fix.

ECEdm: Speaking of unexpected things, what did you think about Porter Robinson playing your remix of his song at Ultra and did you know that he was going to do that

Botnek: That was crazy, our parents think “I don’t know how you guys are making money traveling around the world playing MP3s for people” but when you show them a video like that, they go “Ohhhhh I guess the kids are liking that!”.  But then they still ask us “When are you guys going to make some music like the Rolling Stones?”

Porter had been playing it for a while, we actually talked to him and he said that he was playing Botnek in his sets.  That was a cool track to remix and its always cool when big guys play your tracks, it kind of makes your day and lets you know that you’re doing something right.

ECEdm: What about anyone playing remixes of your songs?

Botnek: Oh yeah that’s super cool, in the beginning that was never common. The first time that we got played was on BBC Radio 1, Geno and Annie had a show at the time and they played our very first single ever, which was called “If You Wanna” on Lazy Rich’s label.  They played it and we were hooting and hollering, thinking “this is awesome”. Now when Avicii played it, we were all “yawn” (joking).

ECEdm: So, you guys came about on Dim Mak because of a remix, correct?

Botnek: True, we did a remix competition for a Felix Cartal single called “Skeleton” and that was actually one of the first things that we ever made together, he put the parts online and we just did it and we won, so we were like “lets do more of this”. The second place winner was “Pants Party”, who are now M Machine, which is even more hilarious.

ECEdm: So, you were working with Chuckie’s and Lazy Rich’s labels before that?

Botnek: Yes, we weren’t signed to anybody but remixes would come in and people would just put in requests for tracks.  We didn’t have any management or anything, we had nothing.  We were just chilling and making tracks, and whatever came our way we did it.

ECEdm: Do you have a favorite gig you’ve ever played, and why?

Botnek: Definitely Tomorrowland, that was super fun.  The thing that blows my mind is that there were super fans there from Canada, we were playing tracks that we hadn’t even finished, that were just demos and people were getting excited and recognizing them when the drums were coming in.

Gordon:  That was so fun, I remember it being the end of the night and I’d definitely had a few drinks and I’m standing at the bar and thinking Tomorrowland is crazy, Carl Cox is waiting next to me, then Sebastian Ingrosso. Best gig – definitely Tomorrowland.

Botnek: It’s our two names put together, Gordon and Erick.

Botnek: Haha, yeah in Canadian!  No, it doesn’t have any meaning whatsoever, it’s just made up. Its meant to mean wacky basslines and rave music.

ECEdm: Ha!  Do you have plans for another EP?

Botnek: Yes, yes – we have two weeks off before we go to Australia, we’re so excited for warm weather, and during that time were going to pound out what will probably be a new EP or a single for the new year, and just laugh and see how it goes.

ECEdm: Is there anything that you want to say to Seattle or EmeraldCityEDM?

Botnek: Thanks for listening to us jabber! 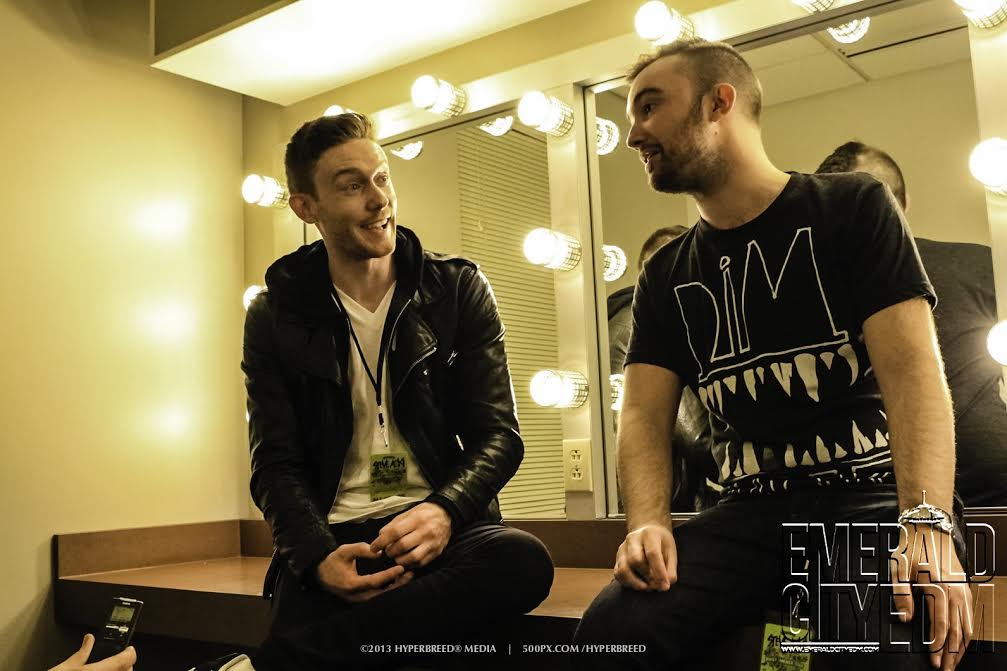