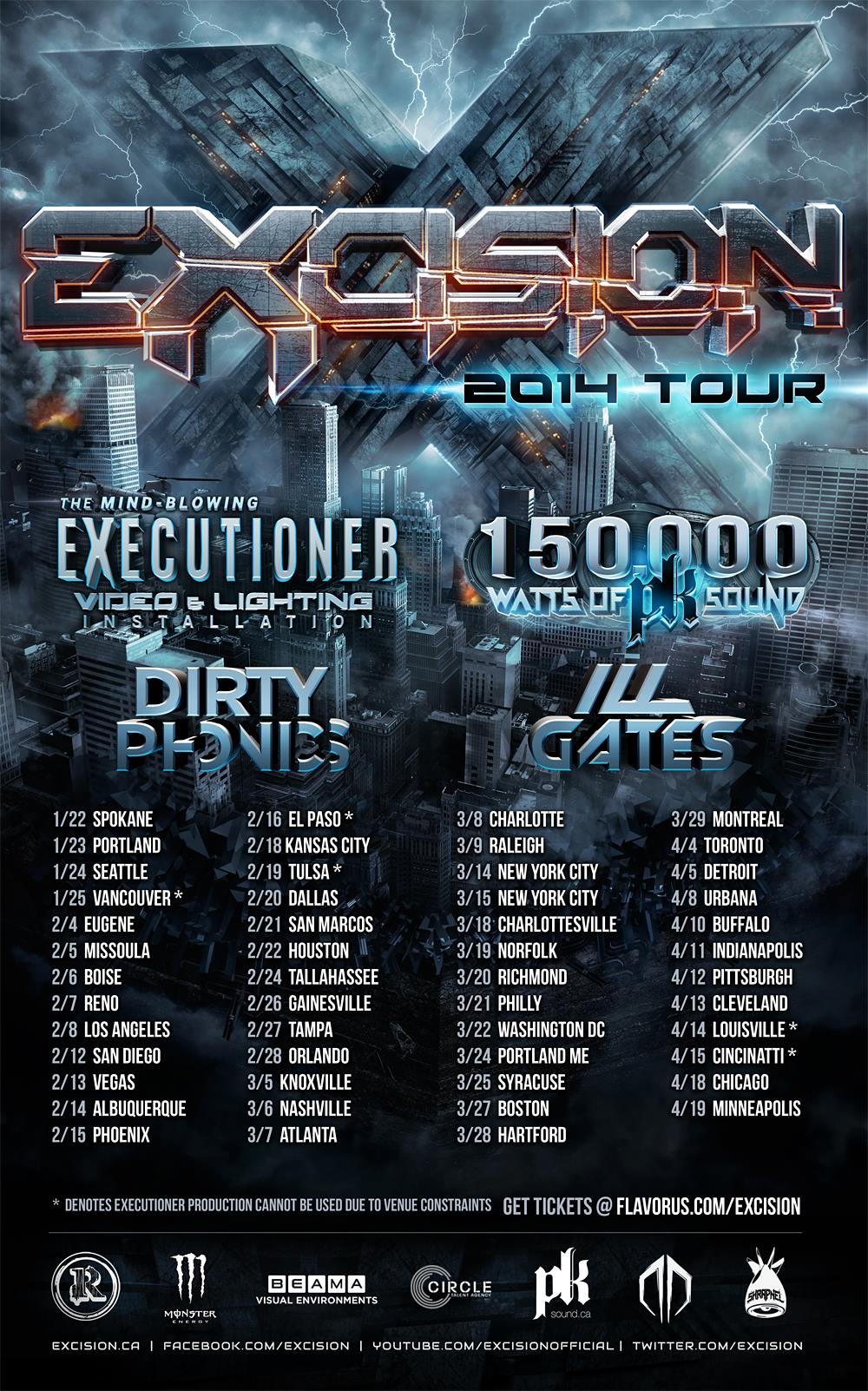 Excision 2014 Tour With Dirtyphonics, Ill Gates & The Return Of The Executioner!

Just announced:  Excision will be bringing the “Executioner”, a 150,000 watt PK sound system with integrated video & lighting, back to the Paramount Theater on Friday, January 24th, 2014!   Presented by USC Events and STG Presents, the tour will feature support by bass artists Dirtyphonics  and ill.Gates.  The Executioner was last in Seattle at the Paramount Theater in February of 2012.

Excision announced the tour dates via Facebook, stating that he “Couldn’t be more excited to announce the next North American tour alongside Dirtyphonics and ill.Gates. Of course we’ll be bringing the Executioner setup and its 150,000 watts of PK Sound. Let’s go!!!”

Press Release: Excision announces his massive 2014 tour. Starting Wednesday, January 22, 2014 in Spokane, Washington Excision will hit the road only weeks after wrapping the final string of Destroid live shows for 2013. His 2014 tour includes over 55 dates that will take him across North America through the end of April.

Embracing an unyielding pursuit to push the boundaries of bass music, Excision is continually creating and re-imagining innovative uses of cutting edge technology to impact his fans, as well as the EDM community at large. His 2014 tour will prove to be his most extensive and most immersive tour experience to date. With an already phenomenal level of production at his disposal, believe he has gone even further. He is stepping things up to a whole new level and bringing a monstrous 150,000 watts of PK sound, whose systems have become an integral part of Excision’s tour production. PK’s unique sound is capable of delivering insanely loud yet crystal clear audio to blast dance floors with room shaking bass in a way that bass music is ultimately designed to be felt as well as heard.

The 2014 tour also marks the return of the 28 foot wide, 15 foot tall mammoth video and lighting installation known as The Executioner. This custom crafted stage production was specifically designed for Excision’s 3D video mapped visual sequences as he DJ’s both music and video live on stage. The Executioner is fully recharged and returning as Excision’s on-stage bass bunker, complete with brand new 3D visual animations displayed across its 420 square feet of surface area. This technological audio video monstrosity is equipped with various sliding panels and pneumatics to hide lasers, fog machines, an extensively upgraded lighting system and more than a few surprises yet to be revealed.

Supporting Excision on this tour will be the French drum and bass DJ team Dirtyphonics, and the Canadian glitch-hop guru Ill Gates. The diversity in the current state of bass music will be well represented. Showcasing how different artists have chosen to craft signature styles and self expression through the myriad of bass music sub genres.