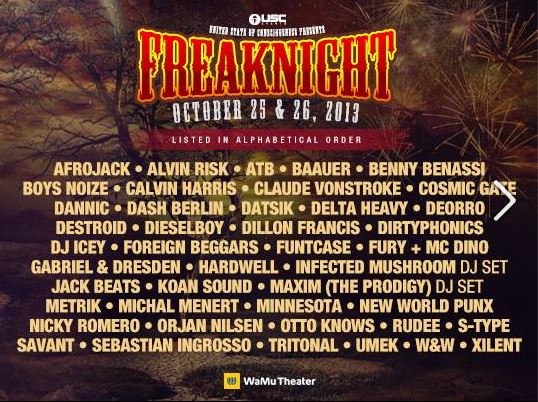 The FreakNight 2013 Phase III final lineup announcement has been released!  Announced via Twitter and Facebook:   We feel the Halloween chill looming in the air, and it’s got us shaking with anticipation! At the end of this month, we’ll be dancing and playing under the Big Top at WaMu Theater for the most frightful affair of the year: the 17th Annual FreakNight Festival! Today we’re excited to deliver the Phase 3 Announcement! The full lineup of ringmasters for this year’s twisted circus is listed below.

We encourage you to pick up your tickets as soon as possible.  FreakNight sold out in advance last year, and with the addition of Phase 3 we expect tickets to disappear even sooner this time around! More info and tickets for FreakWeek events coming soon.

This lineup is insane!   Thank you USC Events, you really are going all out and bringing it!   With two major new name EDM acts already on the lineup (Destroid & New World Punx), the addition of the Phase III names rounds out the lineup and shows that Freaknight is finally on the same level as the other major west coast USA festivals.

Tickets:  Note that no single day passes will be available to purchase.  However, two day tickets are sold as a pair with a separate ticket for each day making it very easy to trade sell or exchange tickets by day.  Tickets are expected to sell out so don’t delay and grab yours today.  Purchase in person at the WaMu Theater box office to avoid paying service fees.

Entry:  Per USC Eevents, the problems that caused entry line wait times to exceed two hours at Freaknight 2012 have been corrected:  “We’ve added more entrances & streamlined the process for a much faster entry this year”.