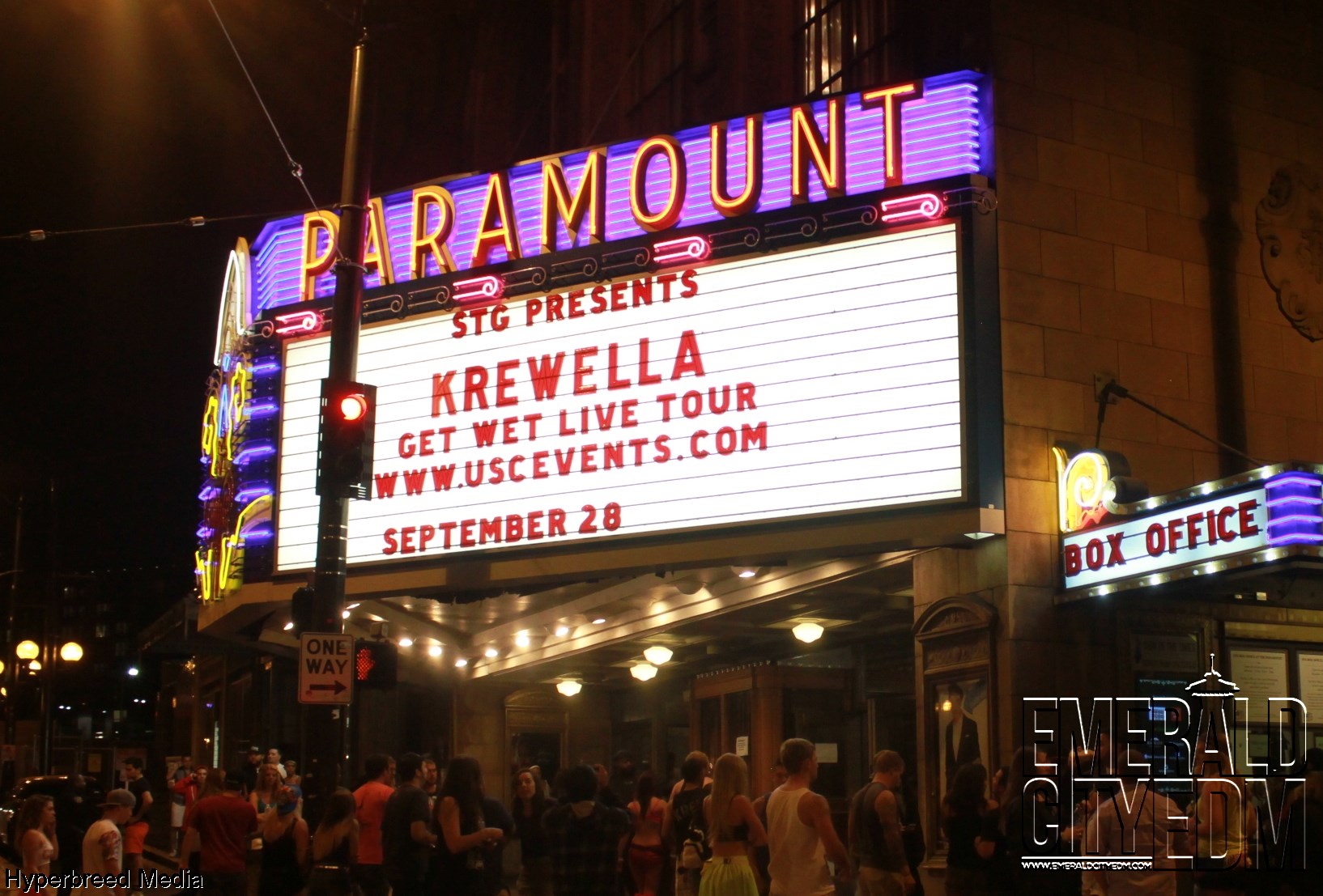 “I live for the night, I live for the lights” sang sisters Yasmine and Jahan Yousaf of Krewella as they kicked off their sold out Get Wet Live show at the Paramount Theatre in Seattle, WA on Saturday, September 28th.  And what a show it was!  The Paramount Theater was packed full of fans ready to “Get Wet” with Krewella, Seven Lions and Candyland. 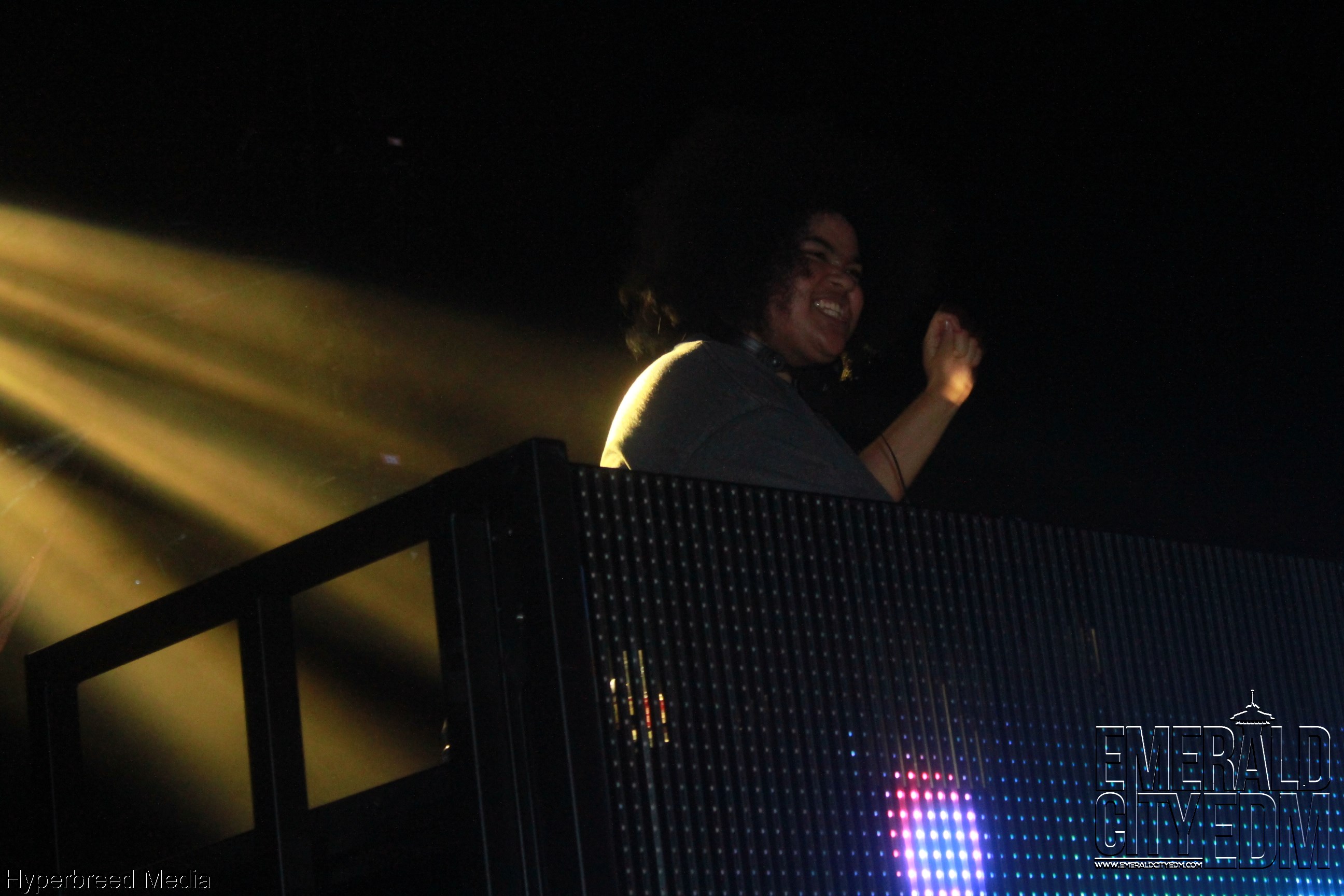 Up and coming dubstep producers Candyland (only one member present) kicked off the show. 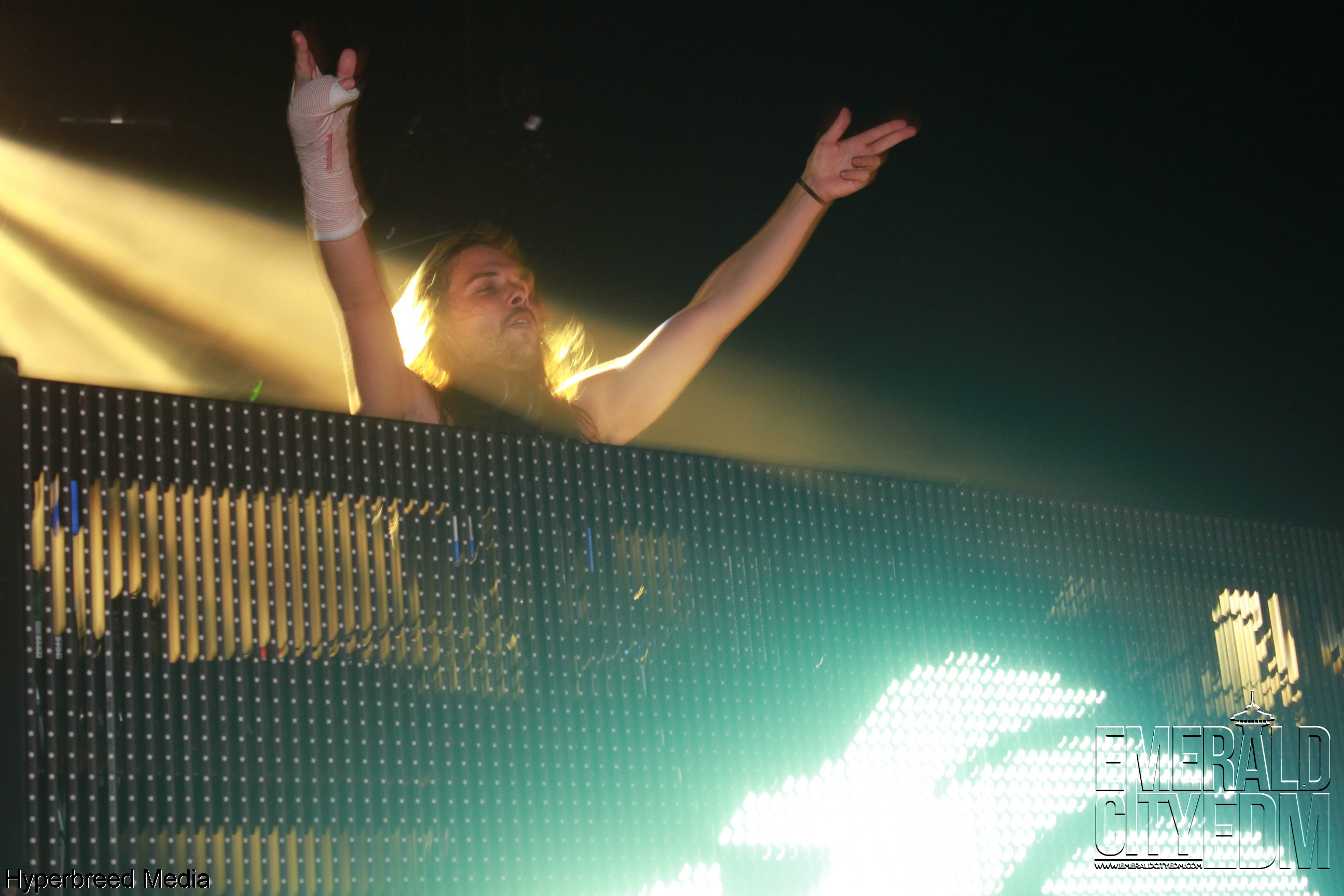 Seven Lions followed and kicked off his set with his signature hit track “Days to Come”.  The crowd instantly began cheering upon recognizing the first bassline.  As fans began to fill up the theater, Seven Lions really got the crowd going with his signature soulful mix of trance and bass Seven Lions played a highly energetic set, incorporating heavy metal elements and other genres with his signature hits, remixing a variety of artists including Tritonal, Lana Del Ray, Nicktim (Nicky Romero & Avicii), Dank and Florence & The Machine, among others.  Seven Lions’ blend of soulful dubstep and trance set the stage and energy perfectly for the main attraction, Krewella! 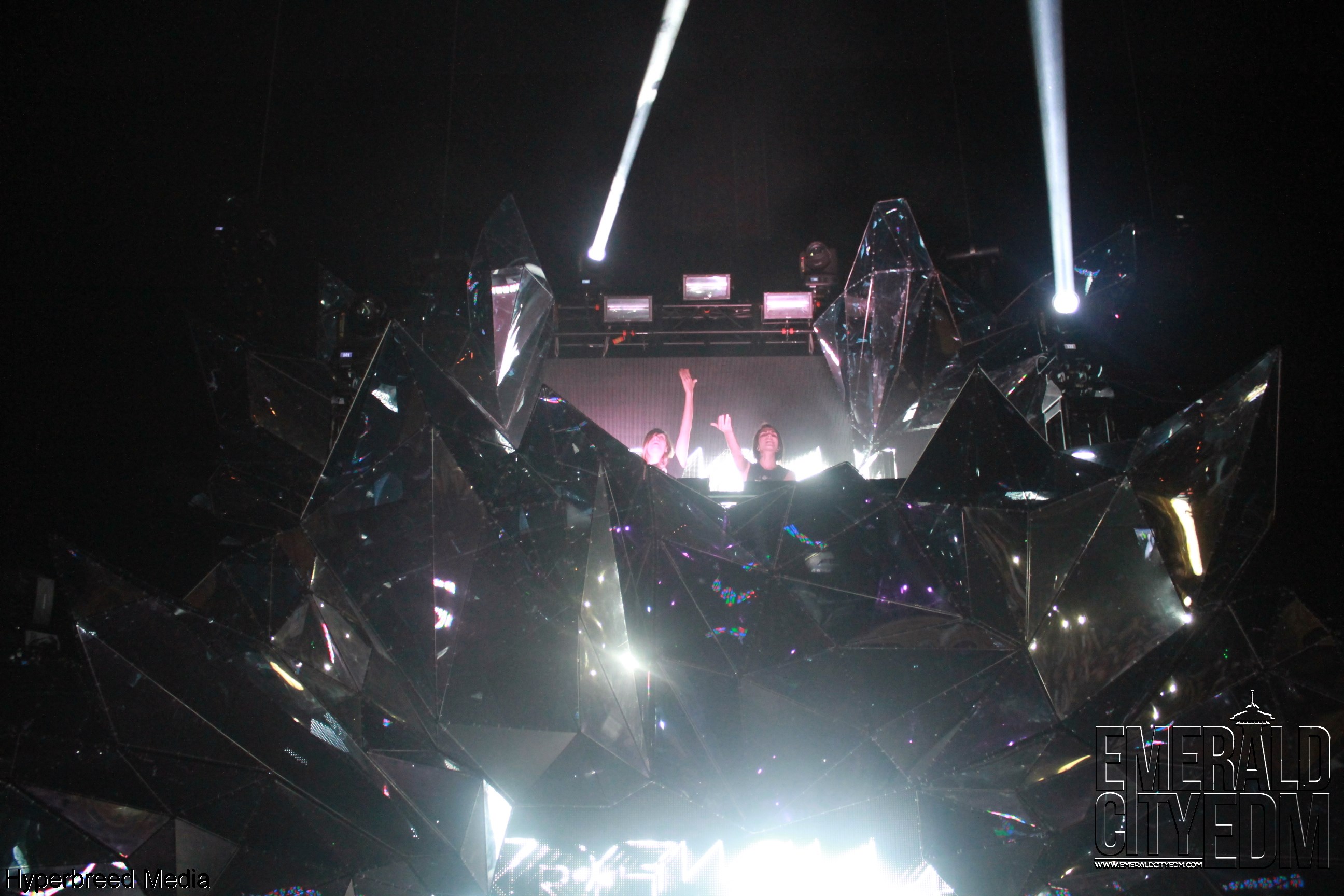 After a brief pause, the main attraction themselves emerged on stage, hands up and ready to rock out to the roaring and excited crowd.   Noticeably absent was third member “Rain Man” Kris.  Per Krewella’s management, Kris is currently on a break from touring due to exhaustion, and is expected to join the girls on tour on October 8th. 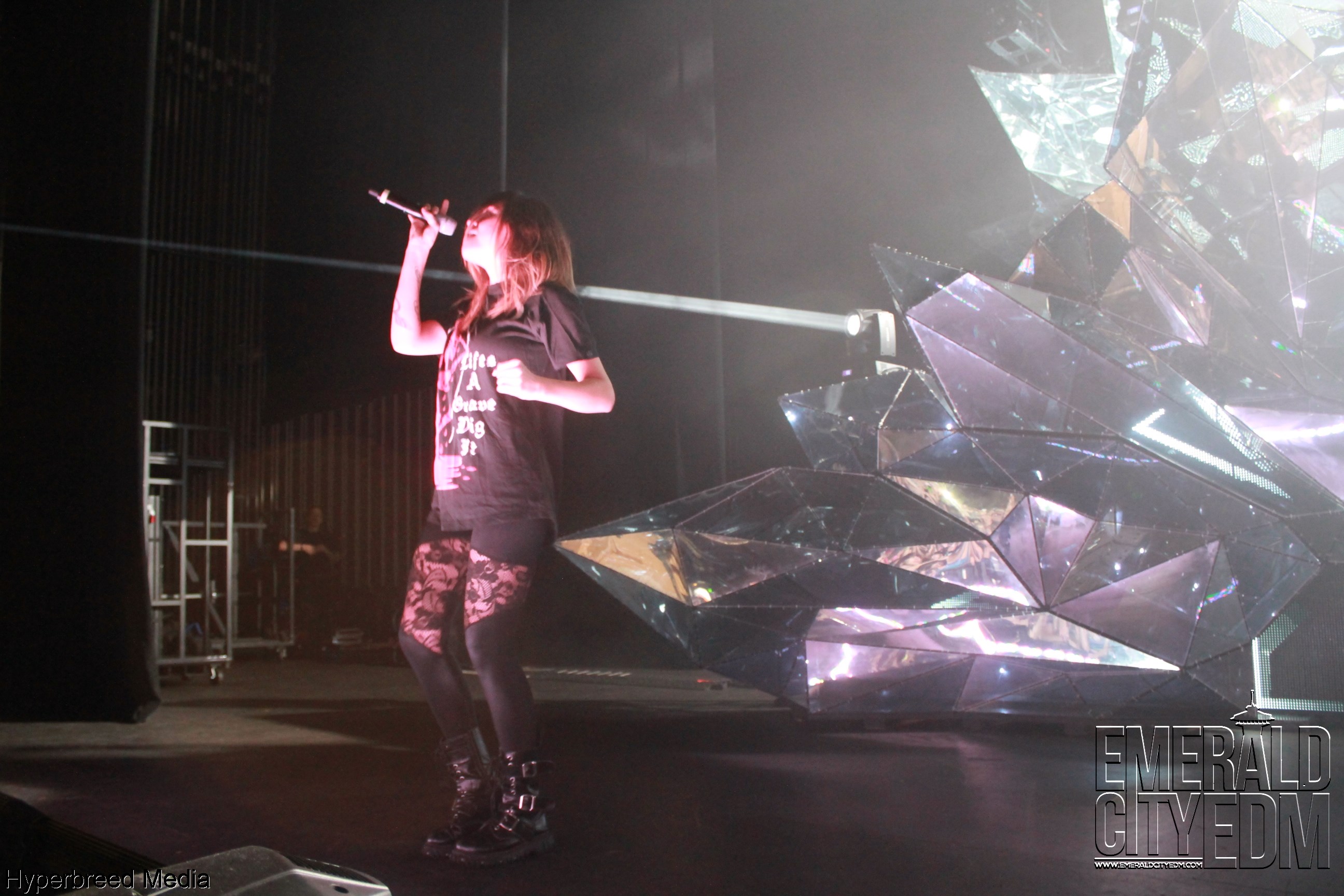 Krewella kicked off with “Live For The Night”, a major track from their debut album “Get Wet”.  The lyrics “I live for the night, I live for the lights, I live for the high til I’m free fallin’, I live for the night” speak for themselves.  The LED DJ Booth “The Volcano” was only partially lit at the beginning of the set, and became more and more illuminated as the set progressed.  The vocals originally were fairly quiet and somewhat hard to hear as they were nearly drowned out by the extreme basslines.  Volume levels were adjusted during the first ten to fifteen minutes, and the vocals became more prominent as the show progressed.

The girls spent the first portion of the show in front of the main DJ booth, following up the opening track with “Fire Hive – Fuck On Me Remix”, “Play Hard”, “Alive” and “Party Monster” all while the Volcano was slowly starting to illuminate.  The Volcano, designed by Vello Virkhaus and Amanda Hamilton of V Squared Labs and constructed by Stefano Novelli, is a 30 by 18 foot structure of LED mapped crystal-like compartments, made of reflective two-way material that allows the appearance to change from the inside, an effect referred to as “reflection mapping.”

“We decided to pursue the idea of crystals because we felt they represented the rock vibe of the group,” notes Jake Udell, one of the group’s managers. “At our first meeting when VSquared mentioned the concept of building the crystals out of mirrors, my eyes lit up and I immediately became infatuated with pushing the boundary of possibilities.”

With the girls launching into an aggressive vocal version of “This Is Not The End”, bolts of light began to emanate like tentacles from the center of DJ booth and the Volcano came fully to life: 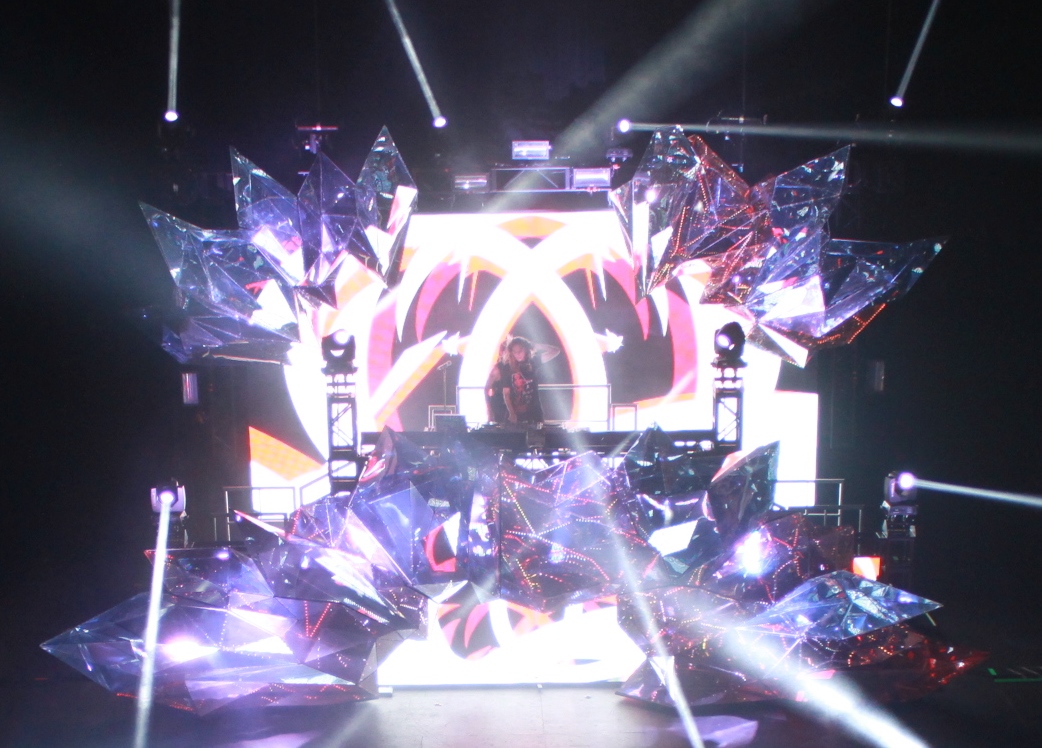 Krewella’s signature auto tune sound began to be incorporated in to the set once the Volcano was fully lit, and only added to the impressive display of the group’s full sound and light arsenal. While the majority of the set included full live vocals, the group did include elements of their signature produced sound in the second half of the show. The girls began to bounce between the main stage and the DJ booth, trading off on vocals and making for some high energy visual entertainment. They joined hands and returned to the main floor to sing “Save My Life Tonight” from their collaboration with Nicky Romero “Legacy”. 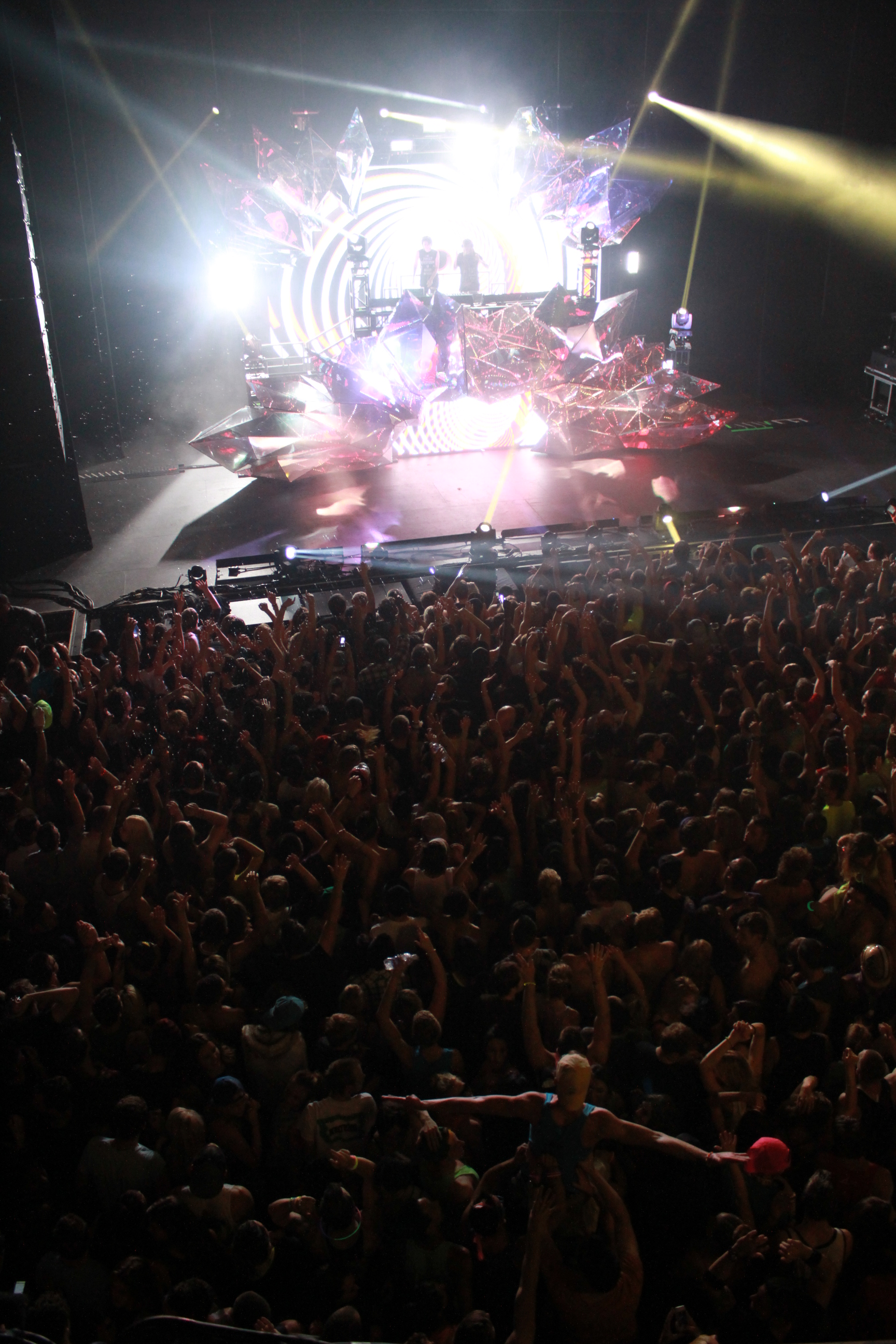 Up next was EmeraldCityEDM’s personal favorite track from the new album “Ring of Fire”, followed by a mixture of Trap, then Hardstyle remixes of “Killin’ It”, “We Go Down”, and “One Minute”.  The girls then remarked how the last time they were in Seattle was at a small venue, or the Showbox, and how excited that they were to be back with a big venue, the perfect introduction for the next track “Enjoy The Ride”! 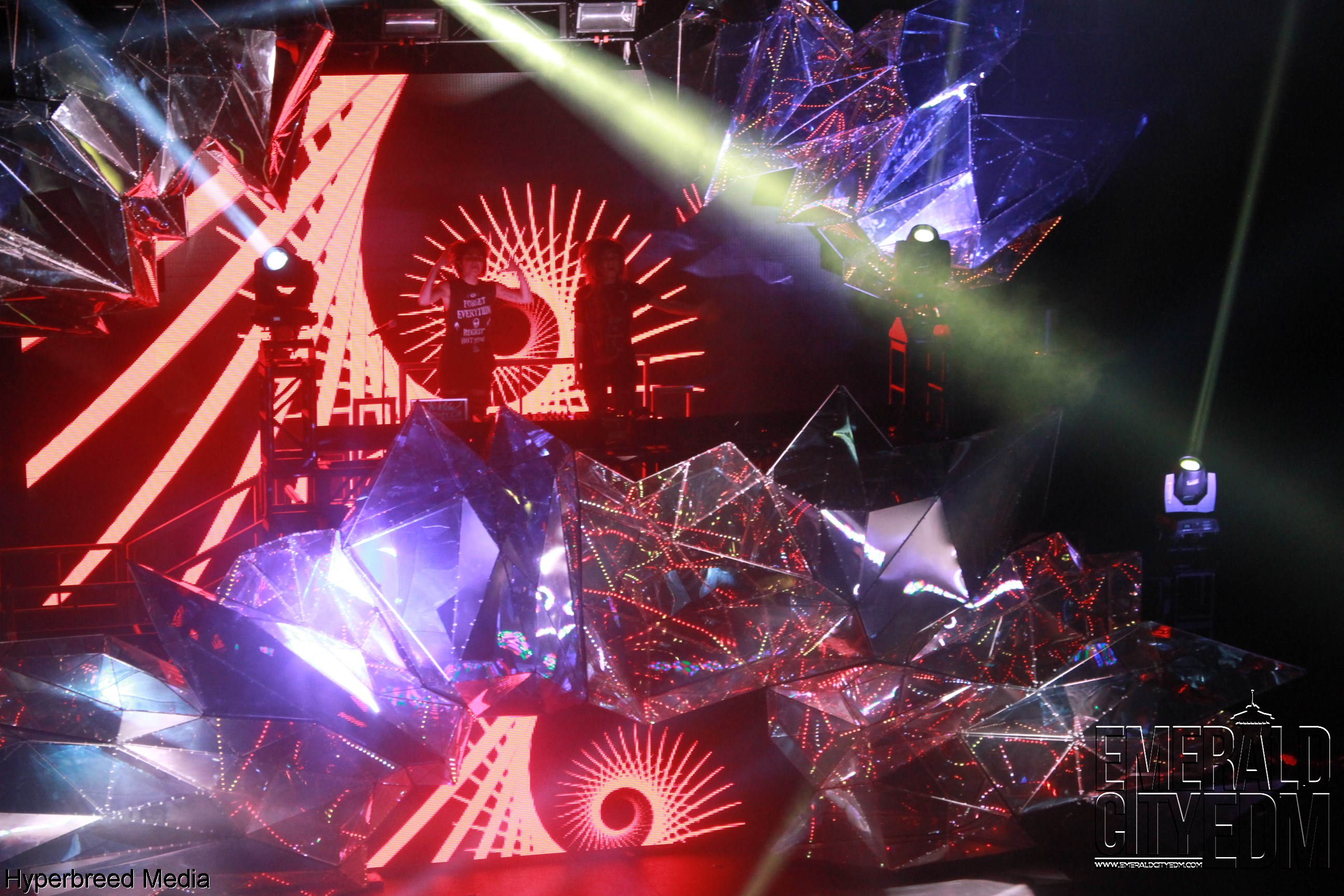 Krewella concluded the set with “Alive”, as the crowd went crazy and started singing along, drowning out the sound coming from the speakers!  The vocals were not able to be heard until mid-song, as the crowd was so enthused with singing along.  After a brief walk off stage, the girls returned for the encore ending with “Come and Get It”.

EmeraldCityEDM notes that while the live vocals were sometimes a bit hard to hear over the bass, overall the vocalists truly demonstrated their ability and prowess and impressed the entire audience.  The girls sang their vocals with fearless delivery and nearly perfect pitch.  The full live vocals were extremely impressive coming from a group that uses so much auto tune in their produced tracks.

About the show, fan Jamie P. said that she “thought the whole show was amazing and I don’t know if it could have been any better” and that there was a “great atmosphere“.   Other fans remarked how amazed they were by Seven Lions, and others were completely wowed by the live vocals and stage presence of the ladies of Krewella.  One thing is clear, Seattle truly got to Live For The Night and absolutely loved Enjoying The Ride with Krewella.