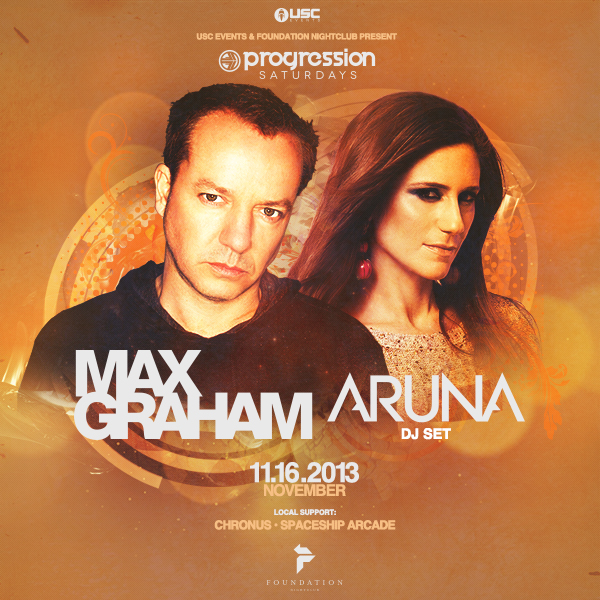 Win a pair of tickets courtesy of TheoryX PR:

EmeraldCityEDM – Max Graham interview:
EmeraldCityEDM had the chance to interview Max, and share some reader questions.  Find out what Max has to say about Seattle, his upcoming gig at Foundation and what’s next:

EmeraldCityEDM:  Hi Max! Hope you are doing well.  Excited to have you at Foundation for the first time, are you looking forward to playing at a new venue and have you heard anything about the club?

Max:  I’ve heard only good things. I’ve played Seattle a couple of times but with Foundation it’s definitely a new era and I’m very excited to be heading back.

EmeraldCityEDM:  Anything in particular you’re looking forward to at the Seattle show?

Max:  I know that the team and the club are top notch so any time you perform in a situation like that it always raises the bar.

EmeraldCityEDM:  We noticed that you’re quite the traveler, and enjoyed reading some of your posts on Jaunted.com. Any thoughts about the city of Seattle from an international DJ’s perspective?

Max:  It’s a beautiful city, driving and flying in is always really cool with the water and the scenery. I’ve usually been in and out and this time is no different, but the short time I’ve been there has always been lovely.

EmeraldCityEDM:  It’s been a while since your last official release in June (EvilID), what is next for you musically? Anything you’re working on in particular that you would like to share? We are HUGE fans of the Cycles radio podcast 🙂

Max:  We had two releases since then, the Remixes Part 1 and Part 2 that I’ve been itching to release for a while. Coming up is Cycles 5 in January that will have 1 or 2 new singles on it. Currently in the studio now finishing up a few bits so I’m expecting more releases for 2014.

Max:  For me it’s been very effective, I’m quite social and love interacting with like-minded music lovers as well as a debate or two. I’m not shy on social media so it’s worked to gain me not only more supporters but also some great friends in far away places. I don’t use my social to promote too much, more to interact and have conversations and I think through that the promotion comes naturally. I’ve met so many people at shows in the last couple of years that have introduced themselves by their Twitter name. It’s actually really cool to kinda pre-meet them on Twitter then meet them in person.

EmeraldCityEDM reader:  You are very interactive with your fans – what’s been some surprises from the interaction?

Max:  I think how much you can learn about people’s impression of the scene and the music. It’s such a fluid industry and it’s amazing to watch and read other people giving you live feedback both on your own work but also on the scene as a whole, to get instant reviews from your shows and other people’s shows almost instantly. It’s a very different world with social media being so honest and instant. I’ve really enjoyed it.

EmeraldCityEDM reader:  Can you explain the difference between a DJ and a producer playing a show? I think some people are confused.

Max:  A DJ combines many different songs/tracks to tell a story with ebbs and flows. Choosing what plays when during the night can greatly affect the vibe of the room and it’s a true art, especially over a 6 or 8 hour set.

A Producer playing a show would show up with only his music on a laptop and perform it live by triggering samples and loops of his own creation (think Deadmau5 or Daft Punk). There are plenty of Producers who show up and DJ a combination of their own stuff and other peoples but that’s not a “Producer playing a show,” that’s a Producer who’s DJing.

EmeraldCityEDM reader:  Who is the girl in Max’s “Owner of a Lonely Heart” video that wears a pink top with a white skirt, that lil blond is dynamite!