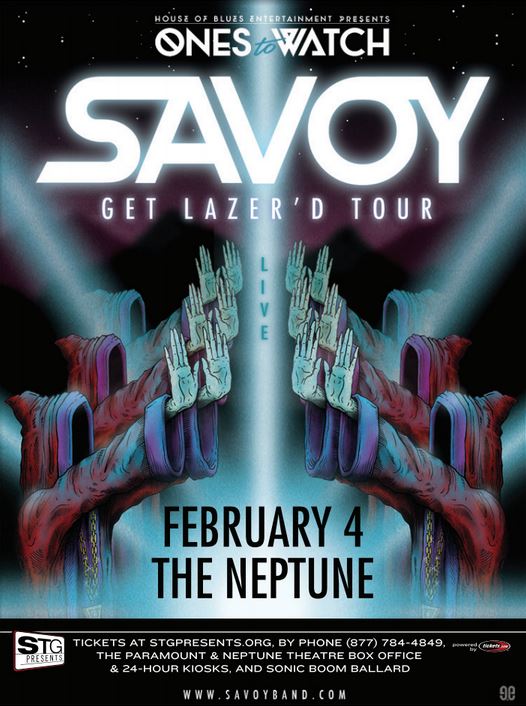 Savoy: Get Lazer’d Tour at the Neptune (WIN TICKETS!)

Savoy will be bringing the “Get Lazer’d” Tour at the Neptune in Seattle on Tuesday, February 4, 2014! EmeraldCityEDM attended a Savoy live show over the summer of 2013 and was BLOWN AWAY.  The live instrumental aspect of Savoy’s performance was a unique treat to the ears.

World-class laser light show specialist Eliav Kadosh will join the “Get Lazer’d Tour” tour, making the Savoy experience unlike anything audiences have ever seen before.  The tour will incorporate a raging light show featuring 250 watts of lasers which are the only lasers in the world government-approved to shoot people in the face.

Win a pair of tickets to this show c/o STG Presents & EmeraldCityEDM:

Latest Single:  Be sure to grab your FREE DOWNLOAD of the latest kick-ass single from Savoy’s upcoming album “Self Predator” here:

Press Release: Bored with the societal norms on what a DJ should look and sound like, three players in NYC are working hard to cultivate a change of scenery for the future of electronic music. Based in Brooklyn and born in Boulder, CO, Savoy is the electronic live hybrid that can easily be compared to a rock band as much as a DJ group. This winter, the trio will return to the road for the Get Lazer’d tour.

In January, they’ll drop their debut full-length album Self Predator for free through their website, Facebook as well as blogs and publications. It will include the single “I’m In Need” which the group is releasing as a free download via their Soundcloud.

Self Predator will also feature all-original Savoy material as well as collaborations with Big Gigantic, Paper Diamond, Heather Bright and SOFI. Its release will kick off their fourth U.S. tour in the last year beginning Thursday, January 16 in Dallas, TX and wrapping Saturday, February 22 in Philadelphia, PA. While on the road, they’ll also be slowly releasing several singles on dance labels including tracks with Borgore, 12th Planet and Krewella.

World-class laser light show specialist and winner of the International Laser Display Association (ILDA) award, Eliav Kadosh will join the “Get Lazer’d Tour” tour, making the Savoy experience unlike anything audiences have ever seen before. The tour will incorporate a raging light show featuring 250 watts of lasers which are the only lasers in the world government-approved to shoot people in the face.

Consisting of producers Ben Eberdt and Gray Smith along with live drummer Mike Kelly, Savoy is one of the most recognizable trios in the game. With quiet beginnings meeting in the dorms at the University of Colorado in Boulder, Eberdt, Smith and Kelly used successful strategies in social media including free releases, free ticket giveaways and constant interaction with fans as well as grassroots marketing campaigns to grow Savoy into the act it is today.