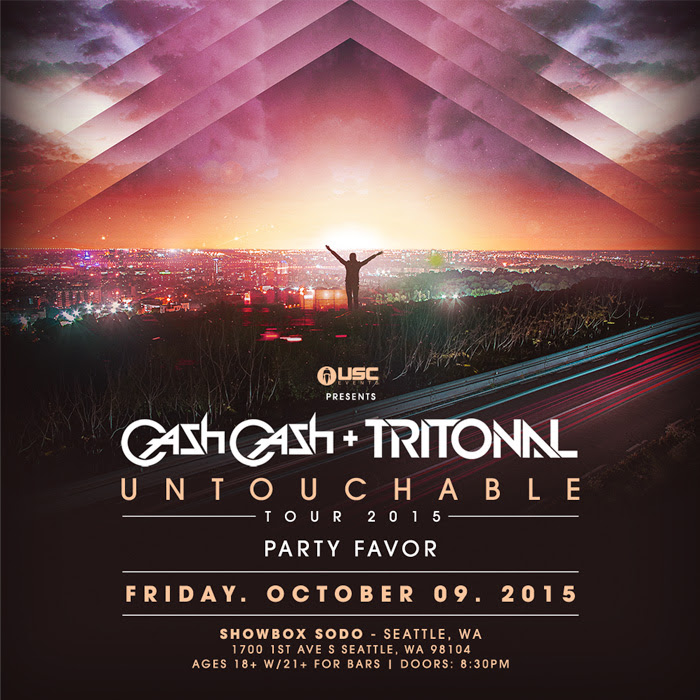 Tritonal and Cash Cash present the Untouchable Tour with Party Favor on Friday, October 9th 2015 at the Showbox Sodo! Two of dance music’s rising favorites Cash Cash and Tritonal raise the bar on touring, announcing an incredible three-month joint “Untouchable Tour” across the length and breadth of North America.

Listen to Untouchable by Tritonal:

“We’ve been wanting to do a full US run like the Untouchable Tour for quite some time” tells JP Makhlouf of CashCash, “Clubs and festivals are amazing but it’s always fun to go city by city night after night in a bus hitting all the places we don’t normally get to play when we’re on a fly out schedule. That being said, we’re thrilled to embark on this journey with our good friends Tritonal. Our styles fit together really well and doing a song/tour together makes perfect sense. Mark your calendars and come get wild with us!”

“The Untouchable Tour is hands down the largest and most extensive American and Canadian tour that we’ve ever embarked on,” said Cisneros, one half of Texan-based duo Tritonal. “There have been so many countless hours in the studio leading up to this point, and we can’t even express how excited we are to play all the new and old Tritonal records across all of the cities. We could’t pick a better bunch of guys than Cash Cash to jump on a tour bus with. Let the craziness begin!”

After their collaboration “Untouchable” scaled the heights of the iTunes and Beatport charts last month, it should come as no surprise to fans and industry insiders alike that the two groups have chosen now to join forces. Both have made serious in-roads establishing themselves as frontrunners in the new generation of homegrown talent and both have scored multiple hit records – Tritonal with an impressive three Billboard Top 10 Dance Chart hits to their name in only the past 12 months while Cash Cash clocked up over 48 million Spotify streams and 15 million YouTube views for hit single “Take Me Home” ft. Bebe Rexha.

Listen to the latest episode of Tritonia:

About Tritonal: Watch a live performance by Tritonal and you’ll understand what all the hype is about. After making a name for themselves as the up-and-comers to watch, the American production and DJ duo consisting of Chad Cisneros and Dave Reed have firmly situated themselves as one of the most electrifying acts in the international EDM scene. Their zest for life and music is apparent to anyone who’s witnessed them in person or through their speakers and is just one reason why they resonate intensely with their loyal followers, “Tritonians.”

Recently earning a spot on MTV Clubland’s “10 Artists to Watch in 2013″ list and landing at #65 on DJ Mag’s Top 100 DJs of 2012, Tritonal continue to launch track after track on to the Beatport charts and ignite dance floors around the world with their energetic and unforgettable sets. Their debut artist album “Piercing the Quiet” produced eight top 20 Beatport singles, including five that held the #1 position on the trance chart for weeks at a time. In September 2012, they released the follow-up “Piercing The Quiet Remixed,” which landed in the top 5 on the iTunes dance albums chart.

Such a rapid ascent into the forefront of an ever-changing dance music industry might intimidate even the most seasoned professionals, but the duo who “complete each other’s musical sentences” have captured the hearts and ears of fans and DJs alike. In 2012, Tritonal stood out on the festival circuit, winning over legions of fans at massive gatherings such as Electric Daisy Carnival, Escape From Wonderland, Ultra Music Festival, A State of Trance 550, and Creamfields Australia. They also managed to find time to release nine new tracks through their record label, Air Up There Recordings, sell out legendary clubs such as Exchange LA and Space Miami and syndicate their popular Air Up There radio show throughout five continents. After 100 episodes of the show, Tritonal ended Air Up There with a sold out, live performance in their hometown of Austin, Texas. A new program called Tritonia will commence in 2013 and will be syndicated on Sirius XM’s Electric Area.

With a fan base of dedicated Tritonians expanding rapidly around the world and a truly memorable, vivacious stage presence which must be seen to be believed, Tritonal continue to shower music lovers with their uplifting, original material and brilliant remixes of some of the best dance music today.