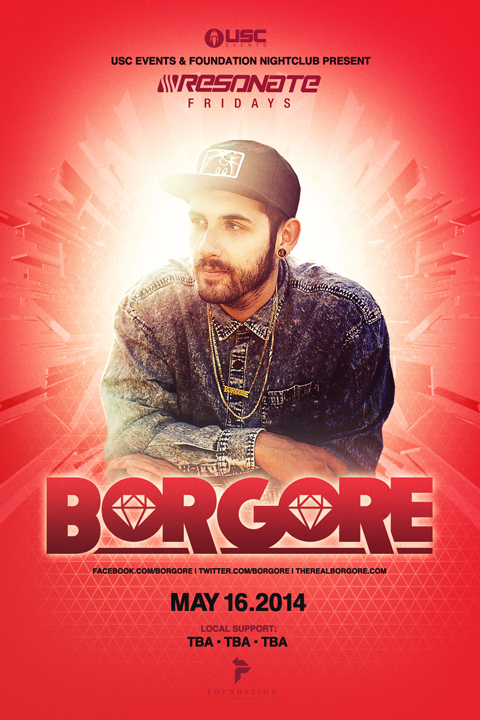 Press Release:  Borgore launches NewGoreOrder North American Tour!  Earlier this April, bass music’s enfant terrible Borgore sprung back into the spotlight teaming with Sikdope for the release of his latest track, “Unicorn Zombie Apocalypse”.  Now, armed with a slew of new music, he’s ready to take this anthem to the masses as he gears up to release his first true artist album in July.  He also announces his NewGoreOrder tour which launches this Thursday, May.  At each show, he’ll perform a round-up of mind-blowing music, making fans privy to some of the material that will be featured on his new album.

About Borgore: The entire Borgore experience – from his speaker-shredding tracks and viral social-media presence to one of the most propulsive, interactive live shows around – has turned him into one of electronic music’s most popular and controversial figures.

The 25-year-old producer/songwriter/DJ has already become a major concert draw: he recently sold out all 1,300 tickets for 2 nights at L.A.’s prestigious Music Box Theater in little over an hour – and that’s one of his smaller shows. Usually he’s playing to tens of thousands, headlining the biggest tents at festivals globally. Taking to the stage alongside his trademark pole dancers, Borgore’s bass-in-your-face frenzy usually ends with a cavalcade of bare breasts onstage and him crowd surfing over furious mosh pits. “Most DJs just sleep behind the decks, checking their email,” Borgore notes. “I try to bring some stage presence: I want to bring something from the live-band culture to the electronic world.”

Borgore’s life changed, however, when he stumbled into a Tel Aviv indie club one night four years ago, where he was assaulted by a selection of early U. K. dubstep tracks on the soundsystem. “The DJ was playing all the Croydon guys – Skream, Benga, Mala, Coki,” Borgore explains. “Hearing that was super life-changing; I loved drum and bass, trance, and hip-hop, and dubstep brought all of that together! It made me feel something I’d never experienced before.” He started making dubstep-influenced tracks immediately: when he began putting them with rude, primitive videos on the Internet, they received instant reaction. “I was like an early version of Rebecca Black or Kreayshawn,” Borgore recalls. “I started with MySpace, and then Facebook and YouTube – and I was doing bigger numbers than the big players. It was all viral: I knew I was doing something right.”

Sharing bills with the likes of Tiesto, Hardwell, Skrillex, Calvin Harris, Rusko, and 12th Planet, Borgore came up with the new global scene of producers and DJs that’s transformed dubstep, moving the sound from dank basement clubs to arenas. His debut digital EP Gorestep Vol. 1 appeared in 2009 on Seattle’s influential Shift Recordings: early Borgore hits like “Love” and “Ice Cream” devastated bassheads with skull-pulverizing drum beats, screaming synth arpeggios, and stomach-churning wobble, topped off by his own humorous, X-rated rapping. It proved so radically distinct from then-mainstream dubstep, he considered it his own genre. “It was different,” he explains. “I came out with some heavy as fuck tunes and called it ‘gorestep.’ Now people who hated me are playing full sets of this sound! They dissed me, calling what I did ‘bro step,’ but I proved them wrong. Girls love my music: I had forty girls dancing onstage with me at a recent show.”

At this point, there’s nothing to stop Borgore doing things his way. He recently relocated from Tel Aviv to Los Angeles in order to build his insane worldwide empire “I’m saying the craziest shit, doing the craziest stuff you’re not supposed to do,” he explains. “I never thought it would get to this point. But whenever I accomplish one dream, I want to get the next, bigger one. Right now, what excites me is making the live show even crazier, and creating a legit artist album – and if I want it, I get it.”