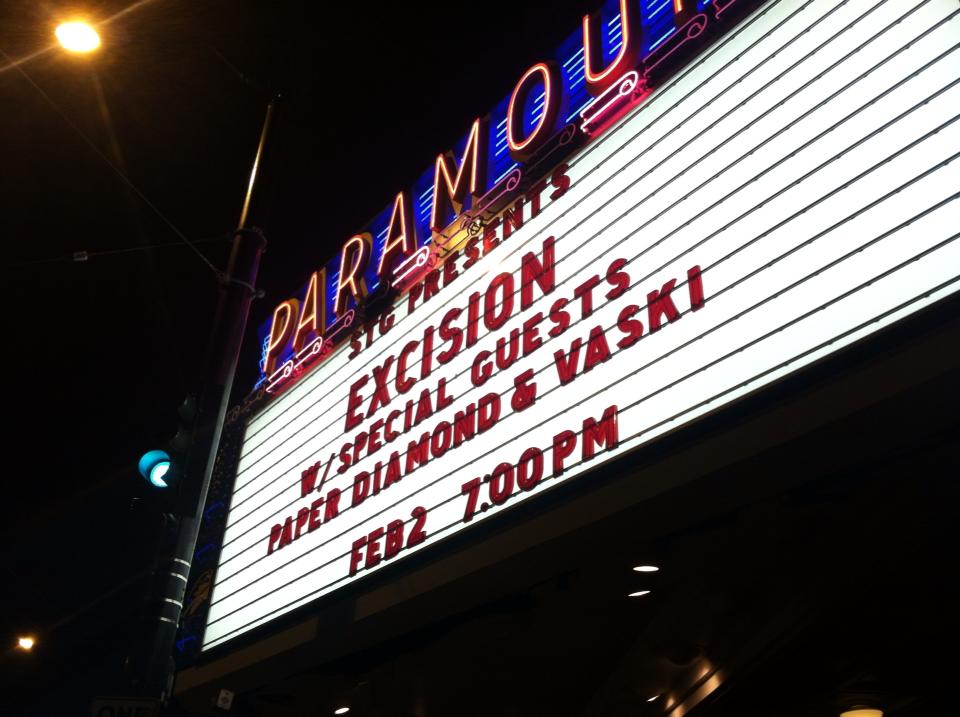 EmeraldCityEDM met with Alex B., aka Paper Diamond, on February 2nd, 2013 before the Seattle stop of the Executioner Tour.  Currently in the second week of the three month tour, Alex had nothing but great things to say about the tour, his fellow artists and current projects.  I found Alex preparing for the show by listening to some music and munching on some chips, this man is the most laid back and chill person I’ve ever had the pleasure of interviewing.  EmeraldCityEDM is very excited to share this exclusive interview with you, please enjoy!

EmeraldCityEDM:  Thank you for doing the interview, it’s rare to conduct an in person interview these days so I really appreciate it.  Let’s get started, is there anything you want to talk about in particular about this show or the tour?

Paper Diamond:  The tour’s been great, everything has been awesome – basically just been hittin’ the road, making some music, working on videos and chilling with some friends.  Last night in Portland was kind of crazy, we got kicked out of a club at the end of the night, but I’ve got my eyes on the prize – just working on my record, making sure the live show is A – super rowdy and B – very representative of what I’m trying to do with music and how I’ve been trying to represent myself.

EmeraldCityEDM:  Wow, what’s it like to do that, that’s a lot to do at one time isn’t it?

Paper Diamond:  Yeah, it is a lot to do at one time but I like it, it gives me something to do.  Some next level shit.

EmeraldCityEDM:  I heard some stories about last night’s Portland show where people were getting physically sick from the oscillations, or something from the PK system?

Paper Diamond:  That’s crazy; the PK is loud… yeah, pretty loud!  That’s why it’s a good idea to wear earplugs.  I wonder if it was because of the sound or something else, it was hot in there for sure!

Paper Diamond:  It’s been great!  Jeff (Excision)’s been working on his show so much, and we’re on two different tour buses, so we haven’t been hanging out that much but I’ve been checking out his set and it’s incredibly dope.  Vaski is on the same tour bus as me and we’ve just been hanging out and working on music. It’s kind of like being put into a “Real World” situation where you’re on a bus with ten different people that you don’t really know.  I’ve got some friends here and there’s a bunch of alcohol – it’s like ‘Here you go, have fun”, you know what I mean? But, it’s cool. Just been getting to know everybody and everyone’s been super respectful of each other’s space.

EmeraldCityEDM:  So how did it come to be the three of you on this tour?

Paper Diamond:  Excision just put it together; I played with him a couple times before in Portland a couple years back. They just hit me up and asked if I’d be interested.  It was kinda crazy saying “Yah I’ll be leaving January 25th and coming back April 20th” – it’s a while and that’s crazy. But we decided to do it and the first week was like – wow.

EmeraldCityEDM:  What about the status of the Elm and Oak label, are you expecting any releases in 2013?

Paper Diamond:  We’ve opened an art gallery in Boulder, which serves as an art gallery where we also hold parties and shows. I’ve been teaching art and business at Colorado University’s Boulder campus and basically trying to inspire people to do whatever it is they do. I’ve been having guest speakers come in, managers, artists and stuff like that so students can really get an idea of what they can be and to inspire people. That’s basically my whole thing – I want to inspire people and help them do what they’re naturally supposed to be doing. I mean, I had that and I was lucky, I had enough – it’s why I am where I am.

As far as the Label goes, the goal is to put out really good music and an eclectic mix of stuff. We had a band called Cherub and that release did great and we were stoked.  It’s really interesting, putting music out now in that everyone wants to just put the music out for free on their own site, as they should.  There are still great benefits for the label side, but it’s pretty much like a piece of a puzzle – all the pieces have to be there.

There are currently five artists on Elm and Oak:  Cherub, Two Fresh, Quiz, Raw Russ, and TK Kayembe.  TK does a bunch of production stuff, and actually produced Angel Haze’s new track “Worken’ Girls”, which is going to be a theme song for a HBO show.

EmeraldCityEDM:  I’ve noticed that you don’t do too much collaboration with others, is there a story behind that?

Paper Diamond:  No, I’ve been working on a bunch of collaborations – I just have a lot to say.  I guess music is my voice. There’s some tension behind it, we each say something different.  I do have a lot of collaborations in the works, but not too much I can really talk about right now.  There will be some collaboration on the new EP.

EmeraldCityEDM:  When do you expect the new EP to come out?

Paper Diamond:  I’m thinking in March or April.  I’m going to put out some mix-tapes in the meantime, I have a lot of songs that are finished that I don’t necessarily want on the record but I still want to release.  We’ve also got a couple music videos finished.

I’ve actually started working on this thing that we call Paper Diamond TV, which is coming soon.  We’re going to put up videos of the tour, “day in the life of” type of stuff – it will be entertaining.

EmeraldCityEDM:  I think the last time you were in Seattle was at Neumos in 2012.  I love that spot, it’s one of my favorite venues.  Do you have any thoughts about that show or Seattle?

Paper Diamond:  Yes, that was a while ago.  Actually, I just I was thinking about getting a tattoo here and I was looking at all the Seattle imagery.  I’ve been getting tattoos in different cities and was thinking about getting a Seattle tattoo to remember the city.  I haven’t decided yet what I’m going to get, but I’ll probably decide tomorrow.  They all have meaning to them but each ones different.  I’m going to be kind of like a piece of luggage, a piece of each one on the way down.

EmeraldCityEDM: Any plans for a Pnuma Trio reunion?

Paper Diamond:  Yeah, Pnuma!  That’s my old band that I was in for several years.  Basically, I dropped out of school and that was the band that I started with. We were touring for a couple years, 226 shows a year or something like that. I’m not opposed to a reunion but there are no plans for one.  I’m extremely busy working on the new Paper Diamond record and I have a bunch of new songs that I’m working on, so I’m certainly open to it and I’d like to keep in touch with them but, no reunion plans.

EmeraldCityEDM:  Anything bad happen on the tour, or anything unexpected?

Paper Diamond:  I’ve woken up really hung over a couple of days but that’s pretty much the extent of the bad stuff that happened.   We did get kicked out of a Portland club last night though.

Paper Diamond:  No. If anything we were the proper level of rowdy!  I was drinking the last sip of my beer walking toward the exit, where there’s a trash can, planning to throw my beer in the trash on the way out and the DJ stops DJing to accost me and tell me that I can’t take my beer outside.  I’m just finishing the beer, and this DJ says “GET OUT”, then this angry looking bouncer dude comes over saying “you tryin’ to fight ME?”  and I said “not today” –  I’m not trying to fight you – ever, at all!  But other than that, Portland was cool.  Pretty much when you have a bus full of dudes, you never know what’s going to happen.  It’s pretty much comedy – unless it’s first thing in the morning.

EmeraldCityEDM:  Seattle’s excited to see you!   Especially the more selective listeners, who aren’t specifically into only Dupstep or big names – we really like the variety of music that you bring.   I think that you’re able to attract a much larger audience for that reason.  Seattle definitely appreciates you.

Paper Diamond:  Thank you, I do whatever I can do.  It’s Seattle, and with the musical talent that comes through here I feel honored to come through and play my own shit. 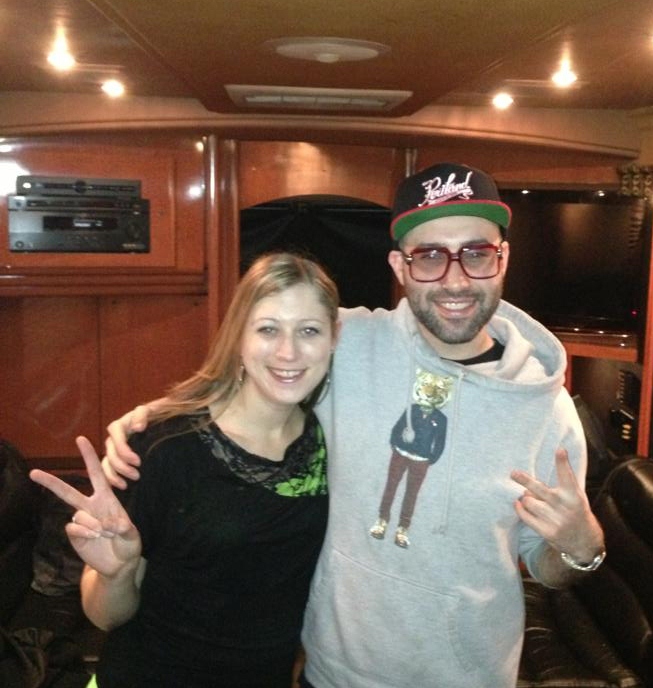