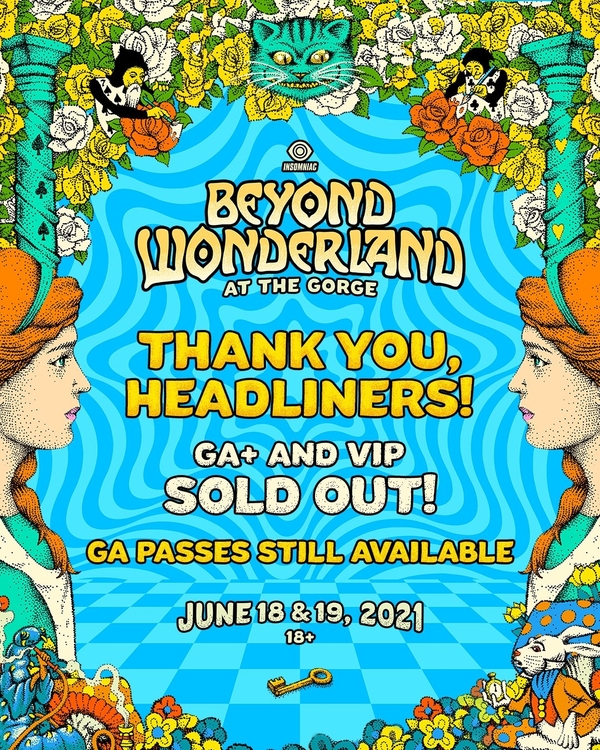 Beyond Wonderland PNW 2021: On Sale Now!

BeyondWonderlandPNW at the Gorge has been officially rescheduled to June 18th & 19th, 2021! Tickets are on sale now, with GA tickets starting at $199, VIP tickets at $349 and camping at $109.50. Payment plans are available for a $5 fee. Insomniac confirmed that your camping ticket from last year it is still valid, unless it was automatically refunded.

#BeyondPNW takes over The Gorge June 18+19, 2021 for 2 nights of Music, Art & Exploration + 3 magical nights of Camping! We can’t wait to see you all as our Next Chapter unfolds at our stunning brand new venue. -Insomniac Events If you kept your tickets from 2020, you should have received one of these emails from Insomniac Events acknowledging an upgrade: Stay tuned for more information! We will post it here as it is confirmed. Sign up for the BeyondWonderlandPNW email newsletter at PNW.BeyondWonderland.com for updates.

Update 5/6/2020: Beyond Wonderland PNW has been postponed to 2021. Refunds are available to request here. Tickets will be valid in 2021, with free upgrades as follows: GA tickets will be upgraded to GA+ (expedited dedicated entry and premium air-conditioned restroom access), GA+ will be upgraded to VIP and each VIP ticket will receive a second complimentary VIP ticket to bring a friend.

Payment plan payments have been suspended and no tickets will be voided for missed payments. You will have an opportunity to either request a refund or make up missed payments at a later time. There will be at least a two week notice before payments resume again.

No information was released regarding camping, but Insomniac stated “Stay tuned to your email for more info regarding camping and other details”. Exact dates dates have not been announced yet, but Insomniac noted “We are working hard to have the same or a better lineup.” More information and FAQs are available at Pnw.beyondwonderland.com/support/, and if you cannot find an answer to your question you can submit an online inquiry here.

STAY STRONG, STAY SAFE, AND STAY POSITIVE! The well-being of our Headliner community has always been a guiding light at Insomniac. Though the world is moving in a more positive direction, it is still too early for us to gather at Beyond Wonderland at The Gorge in 2020. While we are disappointed by this outcome, we are excited to shift our focus to creating an unforgettable experience for next year’s festival. -Insomniac Events